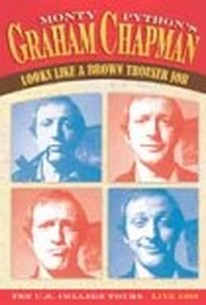 After ascending the ladder to fame as a key member of the legendary Monty Python troupe in the 1970s, Graham Chapman spent the following decade entertaining audiences with a series of "comedy lectures" at college campuses across North America. Consisting of anecdotes taken from both his eventful private life as well as his outrageous adventures with the so-called Dangerous Sports Club that included such luminaries as Keith Moon and many former Pythons, Graham's lively one-man shows offered a fittingly intimate and hilarious final chapter in a rich and rewarding career. Now fans of the legendary comic can take a trip back in time to see Chapman at his absolute prime in this release, which captures some of the most memorable moments from his tireless one-man tour. ~ Jason Buchanan, Rovi

There are no critic reviews yet for Graham Chapman: Looks Like Another Brown Trouser Job. Keep checking Rotten Tomatoes for updates!

There are no featured reviews for Graham Chapman: Looks Like Another Brown Trouser Job at this time.