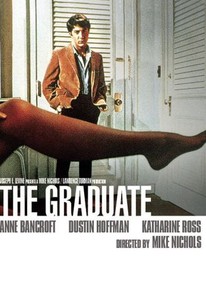 Critics Consensus: The music, the performances, the precision in capturing the post-college malaise -- The Graduate's coming-of-age story is indeed one for the ages.

Critics Consensus: The music, the performances, the precision in capturing the post-college malaise -- The Graduate's coming-of-age story is indeed one for the ages.

Critic Consensus: The music, the performances, the precision in capturing the post-college malaise -- The Graduate's coming-of-age story is indeed one for the ages.

"One word: plastics." "Are you here for an affair?" These lines and others became cultural touchstones, as 1960s youth rebellion seeped into the California upper middle-class in Mike Nichols' landmark hit. Mentally adrift the summer after graduating from college, suburbanite Benjamin Braddock (Dustin Hoffman) would rather float in his parents' pool than follow adult advice about his future. But the exhortation of family friend Mr. Robinson (Murray Hamilton) to seize every possible opportunity inspires Ben to accept an offer of sex from icily feline Mrs. Robinson (Anne Bancroft). The affair and the pool are all well and good until Ben is pushed to go out with the Robinsons' daughter Elaine (Katharine Ross) and he falls in love with her. Mrs. Robinson sabotages the relationship and an understandably disgusted Elaine runs back to college. Determined not to let Elaine get away, Ben follows her to school and then disrupts her family-sanctioned wedding. None too happy about her pre-determined destiny, Elaine flees with Ben -- but to what? Directing his second feature film after Who's Afraid of Virginia Woolf?, Nichols matched the story's satire of suffocating middle-class shallowness with an anti-Hollywood style influenced by the then-voguish French New Wave. Using odd angles, jittery editing, and evocative widescreen photography, Nichols welded a hip New Wave style and a generation-gap theme to a fairly traditional screwball comedy script by Buck Henry and Calder Willingham from Charles Webb's novel. Adding to the European art film sensibility, the movie offers an unsettling and ambiguous ending with no firm closure. And rather than Robert Redford, Nichols opted for a less glamorous unknown for the pivotal role of Ben, turning Hoffman into a star and opening the door for unconventional leading men throughout the 1970s. With a pop-song score written by Paul Simon and performed by Simon & Garfunkel bolstering its contemporary appeal, The Graduate opened to rave reviews in December 1967 and surpassed all commercial expectations. It became the top-grossing film of 1968 and was nominated for seven Oscars, including Best Picture, Actor, and Actress, with Nichols winning Best Director. Together with Bonnie and Clyde, it stands as one of the most influential films of the late '60s, as its mordant dissection of the generation gap helped lead the way to the youth-oriented Hollywood artistic "renaissance" of the early '70s. ~ Lucia Bozzola, Rovi

Eddra Gale
as Woman on Bus

News & Interviews for The Graduate

View All The Graduate News

Critic Reviews for The Graduate

Its pleasures and wit stand the test of time. Plus the cinematography is flat-out fantastic, like David Hockney's pool paintings made live.

Mike Nichols' film makes such beguiling viewing largely because of Hoffman's performance as Benjamin, which combines humour, boredom and panic in equal measure.

Feels as sly, modern and bracing as it must have in 1967.

As it stands, the vacuum of that warped, moneyed Los Angeles society is too exaggerated, too incredible. But one can't help but believe in Hoffman if not in the disjointed character he portrays.

Directorially, it is as cutting-edge late-Sixties as you can get -- all fish-bowl juxtapositions, dappled light and pensive close-ups.

Every cinematic cliche, every formula plot device, every pseudo-intellectual ploy, every sentimental gimmick, every prefabricated, sure-fire boxoffice ingredient designed to empty pocketbooks and dampen hankies is present in this despicable movie.

Pretends to be chic and modern, but its hero is a bewildered young dropout who cannot BEGIN to say what he dislikes about the view from his rubber raft.

Over fifty years after its theatrical release, comedy-drama The Graduate manages to hold up as one of the best films of all time.

All this chopped steak is a give-away on the new tone in films; unless the material is thoroughly banal, it isn't considered chic.

Through Dustin Hoffman's star-making performance, through Simon & Garfunkel's now iconic soundtrack, through Mike Nichols' canny direction, The Graduate captures youth at a crossroads like no other film.

Even though it captures the look and sound of much of the contemporary California scene so skillfully, The Graduate seems to me basically a copout.

Audience Reviews for The Graduate

Could "The Graduate" be the first art-house movie of all time? Ehh, I don't think so, but it's definitely a game-changer. At its time, Hollywood dished out grand epics after grand epics with "perfect" and steady camerawork, larger than life characters, and narratives that stretch at an epic scale. But "The Graduate" does a U-turn on the traditional ways of filmmaking. Unconventional mechanics like quick zooms, strangely edited shots, and lingering close-ups are riddled about in "The Graduate". It does enough difference for it to stand out among other films alike it. But to say that the narrative is different from the rest is an understatement -- its daring, bold, and darkly challenging. Especially after the time the Production Code came to a close, "The Graduate" dives head-first into dark waters. This is a psychologically driven character-study of a young innocent boy finding his place in the world to be a "different" man. "The Graduate" is absolutely effective in what it intends to do. Everything is cohesively crafted: strong thematic foundation, solid character development, sharp writing, and thought-provoking symbolism. Entertaining, provocative, and strangely disturbing, "The Graduate" immerses audiences into a young boy's world that's trying to make the best out of his life.

A personal fav since it debuted, when all I liked was the moody music and couldn't understand what it was about excepting that a sense of loss permeated the work (but NOW I get it - because I grew up with it - and it'll always be a personal fav). Whatever may be wrong with the world, Benjamin decides that its better to face it with someone rather than face it alone.

Dustin Hoffman's charming performance propels this film into one of the best coming-of-age films of all time. The Graduate is highlighted with an artful direction, innocent humor, spellbinding music (soundtrack by Simon & Garfunkel) and an accurate strike on reality. 4/5

You can't get more iconic than this. The Graduate is flawlessly written, deftly acted, and superbly touches us with its unconventionality and ultimate power. It captures the era of the 60s, yet is also profoundly timely. Hoffman's angst is relatable for every young adult watching the film, and the nostalgia and shallowness of American suburbia is also quite relatable to anyone who has spent at least a year living in the suburbs. Anne Bancroft is exceptional and ruthless as Mrs. Robinson, making for an unforgettable performance. The film's aura--the iconic soundtrack and iconic cinematographic choices--is captivating. Ultimately The Graduate is more than a funny, nostalgic movie: it is triumphant. It is a triumph of the human mind and the human spirit.