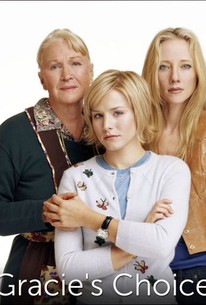 Her childhood forever lost to a mother (Anne Heche in an Emmy-nominated performance) whose irresponsible, drug-fueled escapades forced her and her siblings to fend for themselves, 17-year-old Gracie Thompson (Kristen Bell) vows to pick up the pieces and give her brothers and sisters the mother they've never had in this touching tale of family love and devotion that was inspired by a true story. Determined to finish her education, get a well-paying job, and offer her family the stability that they've never known, Gracie wages a tireless uphill battle to reclaim her family and give them hope for a better future.

Roberta Maxwell
as Judge
View All

There are no critic reviews yet for Gracie's Choice. Keep checking Rotten Tomatoes for updates!

Amazing. This was both uplifting and heartbreaking at the same time. By far one of the best Lifetime movies I've seen to date.

Great movie!! One of the best movies I have ever seen from Lifetime Network. Fantastic story! Kristen Bell is phenomenal in this!