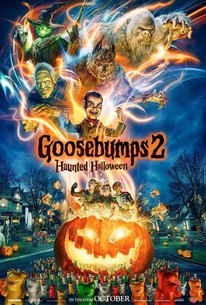 Critics Consensus: Goosebumps 2: Haunted Halloween offers a handful of treats for very young viewers, but compared to the entertaining original, this sequel is a ding dong to ditch.

Critics Consensus: Goosebumps 2: Haunted Halloween offers a handful of treats for very young viewers, but compared to the entertaining original, this sequel is a ding dong to ditch.

Critic Consensus: Goosebumps 2: Haunted Halloween offers a handful of treats for very young viewers, but compared to the entertaining original, this sequel is a ding dong to ditch.

Slappy is back to wreak more havoc this Halloween in a brand-new comedy adventure based on R.L. Stine's 400-million-selling series of books.

Jessi Goei
as Maya
View All

This lacklustre sequel to the 2015 hit Goosebumps hardly has enough jokes to qualify as a comedy, which leaves it stranded in the netherworld of near-horror, aimed at children supposedly not yet ready for the real thing.

It's pointless and bland. Like a bargain-basement Jumanji. The Z-list cast struggle.

Goosebumps 2 is a lively and colourful ghost train ride, with some well-judged scares that would have been at home in its 1980s Amblin forerunners, such as The Goonies and Young Sherlock Holmes.

Yielding fewer jolts and giggles than its predecessor, the results play more like functionally programmed babysitting software than any work of the imagination.

This is a kid-friendly monster mash, but it's truly no graveyard smash.

The cinematic equivalent of a fun-size candy bar.

The second film in a franchise with so much existing material to pull from should simply never be this dull.

Subversive, yet always fun for all Goosebumps 2: Haunted Halloween is spooky with added "Ooo!" and is destined to become a family Halloween classic.

The blend of family-friendly movie monsters is sure to inspire a love of horror in young audiences.

Director Ari Sandel crafts a tale unsettling enough to push kids out of their comfort zones, but not scary enough to ruin their chances of a nightmare-free sleep.

Victor Stiff
In The Seats

You could certainly do a lot worse than this bouncy horror/comedy that's sure to please fans of [R.L.] Stine's long-running novel series.

An unnecessary sequel that has nothing to do with the fantastic spirit the first Goosebumps adaptation had. [Full review in Spanish].

This inevitable sequel apparently seems to be an entirely new story which isn't linked to the original, something that took me by surprise. Not that I recall much from the first movie as almost all movies these days are the same garbage over and over, but the original did leave off with that invisible boy writing a new book. So we're not going to see what happens with that then?? Instead this movie takes us on another route to yet another sleepy small all American town with another bunch of kids. Its the usual spiel, two young boys out for adventure, an older sister trying to get into college, the apparent single mother, and the local school bully. It's your bog standard setup all round. Naturally the boys eventually stumble across Slappy the dummy who eventually reveals himself to be alive. At first the boys think this is great but soon discover the dummy is evil. Alas its too late because Slappy is already setting his plan in motion to bring everything Halloween related to life in order to make Halloween forever...just because. So essentially what we have here is exactly the same story as the first movie (Slappy trying to take over a town), but with a different set of kids. There really doesn't seem to be any proper rhyme or reason to having everything turned into a cheesy Halloween festival, not really sure why Slappy is so obsessed with this idea. I mean, once everything is looking like Halloween town with goofy monsters and trick or treat decorations running around, then what? What is Slappy's endgame here? This movie is so damn cliched and predictable too. Right from the start when we're seeing the local town with all the various Halloween decorations up everywhere, you know straight away all these things will be coming to life at some point. And sure enough. Not only that but many of these creatures are the same damn creatures from the first movie! We've got the werewolf again, the abominable snowman, the gnomes etc...The only difference this time is they replaced the massive gnome attacks with gummi bears (of which there was only a small toy bucket full of gummi bears, yet when they attack there's like millions of them). But what's more, the visual effects are awful! The CGI throughout this movie is really average to say the least. Not even on par with the first movie. Everything is as cliche as the Halloween decorations. Yes admittedly this is based on a kids book franchise and yes this is supposed to be for kids, but come on! The cast isn't specifically bad per se but simply safe and unimpressive. It's like this is their first gig after being picked up from some crappy kids cable channel. But it doesn't help when the script gives them the corniest dialog possible and they're doing the most cliche things possible. It's like the writers got their ideas from the big book of movie cliches that have been done a gazillion times before. I mean seriously, the whole school bully angle, Jesus Christ how generic can you be?? The only highlight in this entire cliche-ridden movie is the brief return of Jack Black as R.L. Stine. From the second Black steps up to the camera with his first line of dialog the movie goes up a gear. But this is only temporary as Black flits in and out of the grand finale until its all over (he misses it). The kids save the day and Stine turns out to be of no use after all. I suppose its good that the big Hollywood movie star doesn't save the day but clearly this movie needed more Black. The difference in quality he brings with his comedic acting is as clear as day (loved the 'IT' reference). Big mistake leaving him out. Spoiler alert! The movie ends on yet another cliffhanger which theoretically should lead into the inevitable third movie. But firstly, they did the same at the end of the first movie and didn't follow that up so...And secondly, this sequel failed at the box office so I'm not sure if we'll see a third.

The original Jack Black Goosebumps movie did not really impress me, and Haunted Halloween is actually fractionally worse. But I still stand by the idea of taking your kids to see monster movies.

Fairly weak, thin story which is basically a rehash of the first movie except with Halloween as the backdrop. Brief, unnecessary "cameo" by Jack Black. Kids may like it, but adults can feel the lack of respect for the adult audience this movie brings. Some standard CGI, which is no longer enough to justify the cost of admission. You need an actual story, characters, acting and then some good CGI is useful. But CGI alone, with a half-hearted story and a cameo by a "name" actor isn't enough to leave most people feeling bummed.