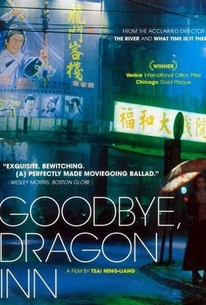 Critics Consensus: Deliberately paced yet absorbing, Goodbye, Dragon Inn offers an affectionate -- and singularly unique -- look at a fading theater that should strike a chord with cineastes.

Critics Consensus: Deliberately paced yet absorbing, Goodbye, Dragon Inn offers an affectionate -- and singularly unique -- look at a fading theater that should strike a chord with cineastes.

Critic Consensus: Deliberately paced yet absorbing, Goodbye, Dragon Inn offers an affectionate -- and singularly unique -- look at a fading theater that should strike a chord with cineastes.

In a cavernous movie palace, King Hu's classic 1968 film Dragon Inn plays for a sparse crowd. As the movie progresses, the ticket-taker makes dinner, cleans the bathroom, and checks in on the projectionist. Audience members wander in and out, occasionally interacting in the restroom or the vast hallways that surround the theater proper. Minimally plotted, Tsai Ming-Liang's film is a poetic, dryly humorous portrait of a place and its denizens, and an homage to a director who influenced his career.

This elegiac 2003 comedy, by the Taiwanese director Tsai Ming-liang, is a requiem for a movie theatre.

A weird, funny, melancholy tribute to movies and movie-going, an opus for film geeks that rang my personal bell.

Idiosyncratic, oddball movie that is both funny and moody.

This is one of the most gorgeous and maturely composed movies you'll see this year.

Tsai is hugely popular with film critics, I believe, in part because film critics actually have something to do while watching his films. While the girl is limping down the hallway, we can take notes. Regular theatergoers? They can only watch helplessly.

Tsai Ming-Ling's bitter-sweet Goodbye Dragon Inn isn't easy to categorise: an exercise in cinematic minimalism, it's a ghost story, a deadpan comedy, and a lament for an earlier era of film-going.

Tsai Ming-liang's stultifying Good Bye, Dragon Inn captures none of the magic of film despite being set in a movie palace on its final day of operations.

It is a film that does have an effect, but it requires a hell of a lot of patience.

What's the matter with these people? Why are they such a bunch of zombies?

Plays as a meditation on the deep feelings felt by the viewer and the filmmaker towards the movie experience.

A haunting, gorgeous and nearly-silent tribute to the experience of cinema-going that perfectly combines melancholy and deadpan humor, with deliberate pacing that may prove too slow to casual moviegoers as it puts sometimes a good deal of emphasis on still moments.

the apex of tsai's cinema, a pure distillation of movie love, both profound and simple. there are only 5 or 6 lines of dialogue in the film. you've been warned

Literally plodding... but entrancing take on filmgoing as both communal act and private quest for validation. Movie theater as bathouse. Total art film - I see some lonely Antonioni in the architecture and some funny Tati in the setups and timing. Oh, and ghosts - lots of ghosts. My first taste of Tsai.