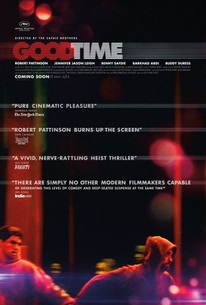 After a botched bank robbery lands his younger brother in prison, Constantine Nikas (Robert Pattinson) embarks on a twisted odyssey through New York City's underworld in an increasingly desperate-and dangerous-attempt to get his brother out of jail. Over the course of one adrenalized night, Constantine finds himself on a mad descent into violence and mayhem as he races against the clock to save his brother and himself, knowing their lives hang in the balance.

Peter Verby
as Peter the Psychiatrist

The urgent docu-style filming is impressive, but it's Pattinson's fearless turn that lingers.

Few of the characters have the first idea what might be coming next - nor do we, strapped into this feral shaggy dog story the Safdies have set rolling, hurtling towards their brilliant future.

This isn't conventional Hollywood-horror/thriller "suspense" but something more primal.

Maybe it's not [the directors'] fault that this dark joyride offers neither an ordered route nor a satisfying destination.

Anchored by a career-best performance by Pattinson, it's an unforgettable work that will rattle you in all the best ways.

Like the revisionist westerns of the 1970s, it takes the conflicted heroes of gangster films and shows them in a different, less flattering light.

Pattinson once again proves his abilities to disappear into a fully fleshed out characterization, here as a selfish yet sympathetic deadbeat.

Never before has somebody drinking a bottle of Sprite made me wince in sympathetic pain and terror.

Robert Pattinson keeps proving that he can be an amazing actor when not playing a ridiculous vampire, delivering a magnetic performance in this frenetic, stylish and super tense movie bathed in neon lights but which only falters a bit in the end by wanting to have a "message."

OF VICE AND MEN - My Review of GOOD TIME (4 Stars) Oh good God is this a good movie! I'm not familiar with the previous work of Benny and Joshua Safdie, aka the Safdie brothers or writer Ronald Bronstein (DADDY LONGLEGS, HEAVEN KNOWS WHAT), but if this blazingly intense, deeply felt crime thriller is any indication, I need to spend some time catching up with them. Clearly with this new film, they've studied the work of Sydney Lumet and Michael Mann, but they put enough of their own original, grimy spin on it to herald a potent new voice in cinema. Coming across with the immediacy of DOG DAY AFTERNOON coupled with the Tangerine Dream-y vibe of Michael Mann's THIEF, GOOD TIME stars Robert Pattinson as Connie Nikas, a small time crook who, along with his mentally challenged brother Nick (Benny Safdie - a stellar actor as well as director), embark on a harrowing escapade. Think Lenny and George from OF MICE AND MEN if they were stuck in the hellfire of New York City. When we first meet Nick, he's meeting with a mental health professional, who makes him terribly uncomfortable when asked a series of questions. Safdie's performance in this scene immediately draws us in to his vulnerability. As a standalone scene, it's a master class in empathetic screen acting. When Connie pulls him from this session, we see the brotherly love and can truly feel what's at stake for them. [MILD PLOT SPOILERS IN THIS PARAGRAPH] The fact that they immediately rob a bank shifts the viewer to recognize the right sentiment/wrong path of their actions. When Nick is caught and arrested, beat up in jail, and subsequently hospitalized, Connie spends the rest of the film trying to rescue his brother. It's this long, mostly real-time night which makes up the bulk of the story. [END SPOILERS] Connie is a classic, desperate hustler who improvises as he goes. Seemingly homeless and with few friends or resources, his sheer force of will and ability to suss up a situation allow him to survive moment to moment. We experience every decision, good or bad, every physical exertion, and all of the painstaking consequences. The role would have gone to Al Pacino were the film made in the 70s, and Pattinson, who has made some incredible choices post-TWILIGHT, doesn't waste the opportunity. He's alive, intense, and drives this steam engine with so much ferocity and passion. Despite his character's terrible choices, you'll find yourself rooting for him. Along the way, our main cast encounters a vivid group of characters along the way. Jennifer Jason Leigh does unhinged better than anybody, and here she shines, especially in a tense scene in which she fights with her mother over the phone while Connie negotiates with a bail bondsman. Their why-does-everything-go-wrong-in-my-life-but-I'm-trying-so-hard-to-keep-it-together reactions make this scene sing. Taliah Webster plays a latchkey kid living with her grandmother, and her no-nonsense attitude plays off beautifully against Pattinson. She's sucked into his vortex and doesn't care about the consequences because what he's offering is better than anything else going on at the moment. Buddy Duress (great and appropriate last name!) brings a fiery energy to his drunken, ex-con maniac. His sudden backstory, which just bursts out of nowhere, is one of the highlights of the film. It's great to see Academy-nominated Barkhad Abdi (CAPTAIN PHILLIPS) back in action and showing great range with his role here as a Security Officer who's in the wrong place at the wrong time. I love the look of this film, scuzzy neorealism but with such a thrusting, visual kick provided by cinematographer Sean Price Williams. Late in the movie, we're treated to a chase sequence seen solely from a high distance, and it's more heartstopping than if the camera were down on the ground. The 80's synth score, while propulsive, and yes, VERY reminiscent of Tangerine Dream, feels too intrusive at times. It's also a bit out of sync with the subject since the film has a more 70s set of references. Think of how Elton John's "Amoreena" was used in DOG DAY AFTERNOON for a more perfect example of a music and subject marriage. Regardless, I enjoyed how the score moved the story forward just as much as the script, performances, and photography did. Speaking of 70s references, the title card uses such an old school, ABC MOVIE OF THE WEEK font, complete with copyright date below. The final scene, an understated coda, plays over the entire end credits sequence. It perplexed me at first, but it's a fantastic ending in retrospect. I can't say enough good things about this little gem. Just go see it and enjoy every single knot in your stomach!