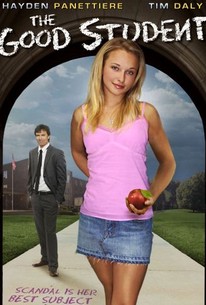 An unpopular high school teacher finds himself the primary suspect in the case of a missing student when news gets out that he was the last person to see her in this dark comedy starring Tim Daly and Hayden Panettiere. Mr. Gibb (Daly) is reviled among the student body as quite possibly the worst teacher ever to stand at the head of the class. He's infatuated with Ally (Panittiere), a popular teen and local celebrity. When Ally suddenly goes missing, the entire suburban town descends into panic. Could Mr. Gibb have something to do with her disappearance? When a police investigation reveals that Mr. Gibb gave Ally a ride home mere moments before she vanished without a trace, the teacher who was universally despised discovers that his troubles have only just begun.

Josh Hutchinson
as Unit Cop No. 2

Critic Reviews for The Good Student

There are no critic reviews yet for The Good Student. Keep checking Rotten Tomatoes for updates!

Audience Reviews for The Good Student

The movie took a while to develop into anything worth watching and it was lacking in, well, everything, like interest, emotion, good acting....but I kind of liked the ending. You aren't really sure who did it, your mind keeps flipping back and forth, and the ending quote really tells you what the movie is about.