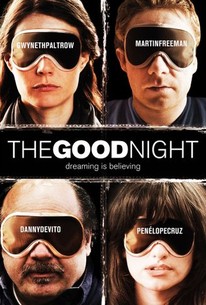 Critics Consensus: That The Good Night is the work of a first-time writer/director is apparent, as the story feels disjointed and never connects with the audience.

Critics Consensus: That The Good Night is the work of a first-time writer/director is apparent, as the story feels disjointed and never connects with the audience.

Critic Consensus: That The Good Night is the work of a first-time writer/director is apparent, as the story feels disjointed and never connects with the audience.

Gary, a once successful musician, struggles with his career and an inert relationship with his girlfriend Dora. As his work as a commercial jingle writer spirals into ever more degrading depths, his best friend and former band mate Paul seems to find success at every turn. Gary is depressed and dejected until he meets Anna. She is everything Gary wants sexually, artistically and intellectually--she is the girl of his dreams, literally. But Gary can only be with Anna in sleep which consequently sends him on a quest for more frequent slumber. With the help of a new age guru named Mel, Gary shuns reality for the comfort of his dreams even as the troubles of his waking life increase.

Jarvis Cocker
as Himself
View All

News & Interviews for The Good Night

View All The Good Night News

Critic Reviews for The Good Night

Such a big grey blanket of misery it should have been called "Eternal Cloud Cover".

A mish-mash of secondhand ideas, with some real misfires.

What comedy there is fails to ignite and the romance is stillborn since we don't care who sleeps with whom or whether they do it in real life or the dream world.

Sadly not the stuff of dreams.

Flawed, but with enough interest to suggest Jake Paltrow may be one to keep an eye out for in future.

...a low-key yet consistently engaging effort...

This sleepyhead Prince Charming is in for a rude awakening when the choosy, chain smoking Anna, actual female that she is, finds him an annoying loser, and at best undesirable. Au revoir, unconditional love. Someone wake me when it's over.

The Good Night is a superlative feature film from Jake Paltrow; a fulfilling buffet of aches and pains from the discontented, poured into an amusing, uneasy comedic fantasy that barely misses a step.

If the hero has trouble dozing off, that's not a problem which will affect many viewers of this movie.

As a comedy of male delusion, Night seems to shrink from its flimsy dramatic subtexts; as a probing of dream and reality in love, its pretensions to depth suggest a neutered comedic courage: Woody Allen-lite.

Audience Reviews for The Good Night

Lackluster tale of a man torn between the iddylic dream life or the difficult, if more substantial, life in the real. Altho a nice middling story with okey-dokey dialogue, there's nada here to herald significant interest.

Terrible movie i was open to this movie! it sounded like a nice sweet fantasy movie that might actually be good but this was probably the worse movie ive ever seen. it has so few laughs that if you miss them you'd think there isnt any! the storyline is boring slow and boring with nit very much going on and in the end leaves you confused i wouldnt recommend this movie to anyone!!

Original and intriguing story, about a former popstar, who as a result of hitting a mid-life crisis, develops an obsessive interest in lucid dreaming. An interest which becomes the trigger for a remarkable, surreal and ultimately life-changing journey. Besides a good and well-written storyline, this movie sure managed to squeeze in a lot familiar faces, american and british actors alike. None of them really stood out from the rest, but they all played their roles well, even if the chemistry between some of the actors could have been a bit better. For all its strengths, however, it's not really the sort of film that will have you jump with excitement, nor stay in your memory for very long. It's hard to point out exactly why that is, but it felt like it was missing one or two key ingredients for me to wanna give it a higher rating than I have. In any case, if you're looking for something out of the ordinary or Charlie Kaufman-ish, then you should give this one a go. Because despite falling short of greatness, it still remains a better-than-average dramedy.

I have been watching a lot of good independent films right now and this one is probably one of the best indie films I've seen in a while. Well, next to Crash. The good thing about the film is that I can relate to it. Sometimes, I dream about girls whom I do not know of and the next day, I find out that those girls are actually in the covers of some magazines. Which makes me feel like I'm a bit of a loser but that's not the thing here. The film have a great cast and this is Mr. Freeman's breakout role I suppose. I'm gonna see more of him in the future, that I'm sure of. Danny Devito, Gwyneth Paltrow and Penelope Cruz also did good jobs in portraying their roles. They executed it with professionalism and with flair. The ending was kinda sad but it was very effective. I suggest other film buffs to watch it because this is how movies should be made.