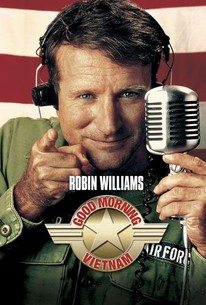 The film begins in 1965, when disc jockey Adrian Cronauer (Robin Williams) is assigned to take over the AFR's Saigon radio broadcasts. In contrast to the dull, by-rote announcers that have preceded him, Cronauer is a bundle of dynamite, heralding each broadcast with a loud "Goooooood morning, Vietnaaaaam," playing whatever records tickle his fancy (even those not officially sanctioned by his hidebound superiors), and indulging in wild flights of improvisational fancy. Cronauer's immediate superior Lt. Hauk (Bruno Kirby), whose own notions of humor are puerile and pathetic, jealously attempts to dethrone Vietnam's favorite rock jock. Fortunately, Cronauer's popularity is such that he enjoys the full protection of the higher-ups. But when Cronauer, after experiencing the horrors of war first-hand, insists upon telling his listeners the truth instead of the official government line, he is instantly replaced by the unfunny Hauk and must struggle to get back on the air.

Vanlap Sangkao
as Viet Cong Leaders in Jungle
View All

From the start, the film bowls you over with excitement and for those who can latch on, it's a nonstop ride.

Offering only hackneyed insights into the war, the film makes for stodgy drama. But Williams' manic monologues behind the mike are worth anybody's money.

Make no mistake about it: Mr. Williams's performance, though it's full of uproarious comedy, is the work of an accomplished actor. ''Good Morning, Vietnam'' is one man's tour de force.

Williams is a virtuoso.

Robin Williams was finally given a showcase for his extraordinary improvisational skills in this, the first comedy set in Vietnam.

The film is distinctive for being Hollywood's first Vietnam comedy and among the first movies to treat the Vietnamese themselves as real people.

The film is all Williams; he has a field day with this character and this country and this period in history, with all its horror -- and comedy.

Good Morning, Vietnam proved that Robin Williams could act and be hilariously funny in the same film.

Robin Williams at his scatalogical finest.

Levinson serio-comedy about Vietnam is first and foremost a star vehicle for comedian Robin Williams, who gives a manic, highly-charged performance as the real-life dj Adrian Cronauer in the early years of the War.

Robin Williams is excellent, making the most of his improvisation skills and ad-libbing every one of those funny broadcasts (though his frenetic sense of humor may not be for everyone), and it is a great thing that the movie has a lot of heart and understands the complexity of that conflict.

Playing with your emotions until the very end, "Good Morning, Vietnam" is the type of film that will have you thinking a certain way about something until it is completey turned around into something different. Beginning as a comedy about a DJ who has come to Vietnam to run a radio station in hopes to lighten the mood of Troops in the war and to give a quirky version of the serious news to people around the country. Although it is the reason he is brought in, it may also be the reason they want him to leave. One thing leads to another and the film does a total 180, turning into an all out drama where Robin Williams gives one of his best performances ever. Extremely well-written, well-directed, and superbly acted by everyone, "Good Morning, Vietnam" is easily one of the best films I've ever seen Robin Williams in.

'Goooooooood morning Vietnam! It's 0600 hours. What does the "O" stand for? O my God, it's early!' Ah back in the day there was a steady stream of Nam war flicks that would produce great performances, great visuals, heavy emotion and eloquent musical scores, this film isn't exactly one of those films. But like all Nam films this too is actually based on true events, the true life events of one Adrian Cronauer, not exactly of course. The films story isn't actually all that original really, it reads more like something of a tacky kids flick, an underdog story or 'Sgt Bilko'. Robin Williams play Cronauer, an Airman and DJ brought over to Saigon (65) to work for the US armed forces on their radio station. Of course up to this point the radio service has been stuffy, dull and pretty uninspiring, but not for long. Cronauer explodes on the air with his own brand of crazy, wacky in your face humour that very quickly upsets his superiors. From here on the film merely shows the battles between Cronauer and his officers and the depths they go to to try get him off the air for good. If ever a film were a vehicle for someone this is it, Williams burst onto the air in the story and burst onto the scene in Hollywood with his performance. Despite the fact that I don't really enjoy watching Williams that much or his style of comedy, you can't deny the tour de force on show here. His continuous verbal assaults make you weary, its amazing how he can go on and on never seeming to run dry. In all honesty much of the humour within the film isn't all that funny really, for me it just gives you an idea of what the characters aim was, some of the dialog and jokes are pretty dated now too. There are some bits of dialog that make you laugh, some that are impressive simply because of the speed Williams relays them, but overall I got tired of listening to him. 'Talkin' out in the field. Hi, what's your name?' 'My name's Bob Fliber!' 'Bob, what do you do?' 'I'm in artillery!' 'Thank you, Bob. Can we play anything for you?' 'Anything! Just play it loud, OK?!' As said the plot is very basic but delivers obvious good morals from Williams character, his companions and the whole idea of trying to provide the truth instead of deception. I'm unsure how much of this film is genuinely truthful as Cronauer is most definitely the perfect superhero. He falls for a local woman, befriends the locals and stands up for the locals against bigotry from US troops, pretty much an all round freedom fighter of justice. Nothing wrong with that of course but it does seem a bit over fabricated, did all this really happen? was Cronauer really involved that much? did he really go against his superiors to the point of disobeying rather important protocols?. A bit of movie magic artistic license methinks. To be honest I found Bruno Kirby's performance as Second Lieutenant 'Steven Hauk' just as good if not better than Williams. This is a guy who believes he is funny and naturally is not...of course. His idea of humour is dated within the film, a kind of old panto/stand up style, but the cringing way he attempts his particular brand of comedy is hilarious and extremely awkward to watch it really is. His character is the typical bickering, snivelling, slimy jobsworth that runs to his superior for backup and assistance when the grunts ignore him showing no respect for rank, classic stuff. Really the film is a bit thin on the ground, there isn't really any conflict action, no real tissue inducing emotional moments, no stunning panoramic views of the countryside and not much of a military aspect at all really. The entire film merely revolves around Williams, his loony antics on air, a brief uninteresting love interest and squabbling with T.J Walsh (admittedly amusing). A constant barrage of his wailing voice that does begin to grate over time, it also shows Williams not to be a good actor for period based war flicks. Bottom line the basic ideals of Cronauer are brought across successfully. You do get behind him, you do empathize with him and you do get a boost when he sticks it to the man (his superiors) and rebels against orders. So yes the film is a feel good factor flick and it does work in that sense. You do also get a glimpse of the senselessness of war and how just a little laughter can release so much hope and joy to the young men being sent into battle and an unknown fate. A powerful realisation for Williams character and probably the strongest sequence in the film. The visuals are effective and capture the mood of the time, if a bit limited, and the soundtrack like most Nam flicks is excellent. The little montages set alongside the music tracks are always good fun to watch. Whether the film is realistic or not, I'd say it is in places but more of a gentle approach, not much death n destruction here people, not that kind of Nam flick. Its an interesting idea to look at military radio during conflicts, and making a comedy is an even bolder move surrounding that idea. Its just the whole amusing concept dies quite quickly and can't really maintain the full run time. The finale is clearly suppose to be a bit of a twist and emotional but it doesn't really work, its also obvious. If you like Nam films then you may like this, I'm not sure, if you're not a Williams fan then definitely no. Of course if you like Williams then its Christmas time for you Sir.