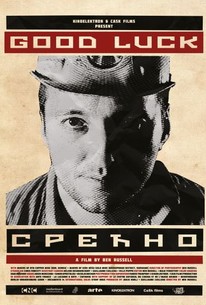 Filmed between a state-owned large-scale underground mine in the war-torn state of Serbia and an illegal mining collective in the tropical heat of Suriname, Good Luck is a visceral documentary portrait of hope and sacrifice in a time of global economic turmoil. Beginning with a 600 meter descent into the depths of the earth, Good Luck shines a flashlight onto the human face of labor in the time-warp'd working conditions of an underground state-owned mine in Serbia. The hiss of oxygen cuts through the diesel rumble, the walls of the office vibrate with explosions two levels below; war-torn and half-forgotten, these miners' physical struggle finds its mirror a continent away--in the tropical heat of an illegal Surinamese gold mine. The water pumps roar under the blinding sun; silver liquid rolls across the hand of a Saramaccan Maroon as he adds mercury to dirt in a never-ending search for gold. Formed between dark and light, cold and heat, North and South, Good Luck immerses its viewer in the precarious natural and social environments of two distinct labor groups so as to better understand the bonds that men share. Here is the human foundation of capital, revealed.

The film feels less like a documentary than like a work of abstract expressionism, yet much beauty can be found in [director Ben] Russell's approach.

Mr. Russell films the morning mist with a Monet-like abstraction and executes remarkable Steadicam shots through the mud. He might be accused of making poverty poetry - except that both sites' unlikely beauty, too, may be a connecting thread.

Good Luck often proves enthralling...as Russell surveys workers standing on opposite hemispheres of our Earth and hauling to the surface the treasure within it.

An engrossing but uncomfortable non-fiction documentary, that seemed like a real-life thriller.

Ben Russell's documentary is a thought-provoking snapshot of humanity reduced to a pale shadow by economic discontent.

Russell's subject here is labour; to reflect it so fully is a vital achievement.

Both below and above the earth, Good Luck offers us a fascinating and heartbreaking universe. [Full Review in Spanish]

The deliberate pace and two-and-a-half-hour run time effectively impart the tedium of the miners' jobs, while the conversational scenes and a series of charming black-and-white portraits give us a sense of personal stakes and a bit of levity.

There are no featured reviews for Good Luck at this time.