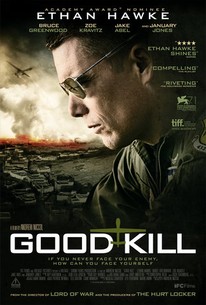 Critics Consensus: Thought-provoking, timely, and anchored by a strong performance from Ethan Hawke, Good Kill is a modern war movie with a troubled conscience.

Critics Consensus: Thought-provoking, timely, and anchored by a strong performance from Ethan Hawke, Good Kill is a modern war movie with a troubled conscience.

Critic Consensus: Thought-provoking, timely, and anchored by a strong performance from Ethan Hawke, Good Kill is a modern war movie with a troubled conscience.

In the shadowy world of drone warfare, combat unfolds like a video game-only with real lives at stake. After six tours of duty, Air Force pilot Tom Egan (Ethan Hawke) yearns to get back into the cockpit of a real plane, but he now fights theTaliban from an air-conditioned box in the Las Vegas desert. When he and his crew start taking orders directly from the CIA, and the stakes are raised, Egan's nerves-and his relationship with his wife (Mad Men's January Jones)-begin to unravel. Revealing the psychological toll drone pilots endure as they are forced to witness the aftermath of their fight against insurgents, Andrew Niccol (Gattaca, Lord of War) directs this riveting insider's view of 21st-century warfare, in which operatives target enemies from half a world away. (C) IFC Films

Fatima El Bahraouy
as The Woman

El Khttabi Abdelouahab
as The Boy

Chakir Faiz
as The Man
View All

Good Kill excels as a character study with Niccol's screenplay making Egan a fascinatingly conflicted and flawed individual and Ethan Hawke giving one of his best recent performances bringing the man to life.

But the visuals pack a visceral punch. Every time Tom zeroes in on a target, every time he pushes that button, what we see on those monitors is brutally authentic.

"Good Kill" is darkly enlightening, but it's not really all that good.

The audience seems likely to leave feeling scolded or pandered to, depending. Not a great time.

"Good Kill" wants to use the movies as a Trojan horse to confront us with our international sins. It's a worthy effort, even if it's not a very well-built horse.

Good Kill gives a better window into the mind of a modern combatant and entices more emotional connection from the viewer than most war movies.

With more stereotypes than you can shake a joystick at, Good Kill reduces an important debate to a cliché-ridden mess. You'll die of boredom before it hits its target.

It's an excellent depiction of modern warfare, a direct, dispassionate way of disposing of threats; yet its cold efficiency is remarkably chilling.

It asks different questions about the kinds of stress we put the men and women in our military to, and they are questions that need to be asked, even if you might not like the answers you arrive at.

Hawke, in particular, delivers a powerful and nuanced portrayal of a patriotic soldier who knows what he does is morally wrong yet realises it is to serve a greater good.

This is a step in the right direction for [Andrew] Niccol.

Major Tom Egan (Ethan Hawke) is a decorated Air-force pilot, who after five deployments, has been assigned to a base in Las Vegas, where he conducts drones strikes over Afghanistan. He hates his job and feels like a coward, but things get a whole lot worse, when the CIA commissions his team to start doing questionable jobs. Egan starts to come apart and take it out on his co-workers and family, leading to an uncertain future. IFC films are right at the top of my list right now as the absolute best in independent film. Seldom have they disappointed me, and I wouldn't describe my feelings about Good Kill as disappointed, but rather indifferent. This film, based on a true story, was exceptionally written and features a fantastic director and an amazing cast, but it also moves at a snails pace and is extremely repetitive. It's just drone strike, reaction, intervention, repeat, over and over again, followed by an ending that wasn't all that surprising. Ethan Hawke gives a powerful performance, despite the fact that he lacks the kind of emotion this role sorely needed. I understand that having Egan be this stone cold guy on the outside is a major theme, but it also makes for a lot of seemingly endless conversations and interactions. Good Kill has a lot of elements I look for in a movie, it's well written, has a cast I really enjoy, a director I know very well, still, it's lacking in emotion and levity. The film is monotonous and much longer than it had to be, all in all, not bad, but not great.

The growingly popular "Modern Warfare" sub-genre, Good Kill is about drone warfare and how an Air Force pilot is forced to become a drone pilot and struggles during the transition. A film like this poses many questions regarding the morality of drone warfare, the problem is it doesn't fully explore them. Instead we are focussed on Hawke's character and how his work life is affecting his personal life. The film does have an excellent cast, Hawke adds another great performance to his filmography but the real star is Greenwood who plays a colonel (a ridiculously underrated actor), Jones and Kravitz are also good. The visuals of terror is great, with very realistic drone combat that is sure to make some look on with horror. The script is so-so, with some pacing issues but director Andrew Niccol does his best to keep the suspense. Overall, a well acted drone warfare movie which vaguely explores the moral issues that comes with it.

A drone pilot struggles with the morality of his job, the urge to fly again, and his marriage. Primarily this film is a debate about the ethics of drone warfare and the "War on Terror." The supporting characters are representatives of political positions, their metonymic function is to parrot the arguments for and against bombing sovereign nations, collateral damage (bombing civilians), and bombing people who might eventually bomb Americans. An overwhelming percentage of the film serves to present this argument, and while the content of their exchanges is largely substantive, it creates an inauthenticity to the film; I doubt that real military personnel engage in this kind of debate in this kind of language. Even January Jones's character becomes a mash of two types: the supportive military wife mixed with the disloyal military wife. Except for the main character, all of the others are cliched types. Ethan Hawke's performance is pretty good. His sensitive eyes and taut jaw convey Tom's conflict, but he's not served by the script, which doesn't give him too far to go in Tom's emotional and ethical development. In one scene, Tom feels guilty about bombing people from thousands of miles away, and in the next scene he feels more guilty about doing the same thing. Hawke does his best, and he's a talented actor, believable in this role, but I wish he had had more to work with. Overall, despite my complaints, Good Kill is not a bad film, but a greater focus on character would've made it better.

Over his career, writer-director Andrew Niccol has made a series of films about advanced technology and how they might apply to Ethan Hawke. With his latest, "Good Kill," there is the state of the art technology of drone warfare. However, this time around, mind the Star Trek('A Taste of Armageddon'), Niccol is more curious about whether any war, no matter how hard we may try, can ever be considered entirely clean while asking questions that require an answer one of these days.(As far as one of those goes, yes that is a war crime.) At the same time, the movie captures exactly how weird a place Las Vegas is and not just because of those ominous overhead shots. What there is of a story concerns Major Thomas Egan(Ethan Hawke), a former Air Force pilot, now relegated to flying drones from an air conditioned room in Nevada. While he desperately wants to get back in the air, his wife Molly(January Jones) desperately wants to have sex. As you can imagine, the excellent performances from Hawke and Bruce Greenwood definitely do make a difference here.