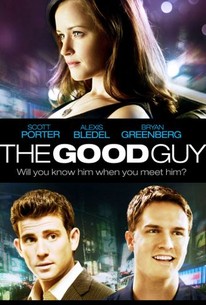 Critics Consensus: The Good Guy has an attractive cast, but they aren't done any favors by the film's cardboard characters and cliched plot.

Critics Consensus: The Good Guy has an attractive cast, but they aren't done any favors by the film's cardboard characters and cliched plot.

Critic Consensus: The Good Guy has an attractive cast, but they aren't done any favors by the film's cardboard characters and cliched plot.

After executive producing the acclaimed documentary Manda Bala and the J.M. Coetzee adaptation Disgrace, Julio DePietro makes his feature debut as a writer-director with The Good Guy, a drama about ambitious young Wall Streeters fighting each other -- and sometimes their own decent nature -- to get ahead in the world. Our narrator, Tommy (Scott Porter of TV's Friday Night Lights), is young, clever, charming, and attractive. He's got a smart, pretty girlfriend, Beth (Alexis Bledel of Gilmore Girls), an urban conservationist. He's also very good at his investment broker job, impressing his ruthless, cynical boss, Cash (erstwhile "Brat Pack" member Andrew McCarthy). When a key member of Tommy's sales team suddenly leaves for a competitor, Tommy needs to fill his spot quickly, and takes a chance on the bumbling Daniel (Bryan Greenberg, Bride Wars), a former Marine and computer geek who seems a bit naïve about high finance and a bit nervous around women. Tommy takes Daniel under his wing, showing him how to dress, where to socialize, and how to charm attractive women. Their relationship is threatened when Daniel begins spending more time with Beth, joining her book club, and becoming her confidant. Tommy begins to question his decision to share his wisdom with Daniel, while Daniel is forced to decide what success really means to him, and where his loyalties lie. The Good Guy also stars Anna Chlumsky (In the Loop) and Aaron Yoo (Disturbia). The film had its world premiere at the 2009 Tribeca Film Festival.

Critic Reviews for The Good Guy

It's network television drama, starring actors best known for their TV work and full of the petty gripes and mild worries of characters who really have nothing compelling to worry about.

It has smart characters, and is wise about the ones who try to tame their intelligence by acting out.

The Good Guy has a few half-cute moments, some chuckles, and enough pretty faces to cast at least two TV pilots. What it doesn't have is a clue.

There's too little difference between the good guys and the bad guys in Julio DePietro's uninspired debut, a slickly cynical romance destined to be quickly forgotten.

Drawing on his stint at a Chicago investment firm, DePietro creates characters, dialogue and situations that feel authentic, which makes the film relevant in unexpected ways, though not as deeply as you hope he'll do in the future.

resh enough to provide the voyeuristic kick of glimpsing the frenzied lifestyle of aspiring masters of the universe.

Mild, pleasant, obvious romantic comedy set on Wall Street that's most notable for its (maybe accurate) portrayal of young brokers as amoral idiots oblivious to the real-life consequences of their risky business.

Even on a reduced scale of expectation, Good Guy is stunningly empty and obvious, missing its mark as a cautionary tale or a romantic sojourn, instead slogging along a preordained trail of cliché.

Writer/director Julio DePietro's first effort is every bit as obvious as it sounds, thudding from one symmetrically perfect cliche to another.

A sort of much more polite, estrogenized filmic companion piece to a lost, mid-era Bret Easton Ellis novel, this movie has a different, interesting cant than most films of its ilk, but can't quite turn that positive into a deal-closing recommendation.

For a movie that clearly aspires to be an up-to-the-minute representation of New York City, The Good Guy already feels quite dated.

Audience Reviews for The Good Guy

Not bad. Not great. Seemed to make an attempt at a nice romantic drama, but doesn't quite go all the way.

I was surprised to see this has a fairly bad rating, I actually quite enjoyed it. I picked it up fairly cheap as it has Alexis Bledel in it. I would never claim she is a great actress, but I liked The Gilmore Girls, and she does have a pleasant girl next door quality which makes her watchable. Then I noticed Andrew McCarthy and Anna Chlumsky where also in it. Even better The story pretty much just follows a girl and her relationship with her boyfriend, and his situation at work. It is one of those all are not as it seems stories. Along the way there are a few laughs with some fun supporting characters and also a male makeover, which makes a change to the usual ugly duckling girl story. I found this pleasant viewing which didn't drag in it's 80 minute run time.

This was actually pretty entertaining. It was a little short, but it was better than I thought it would be.