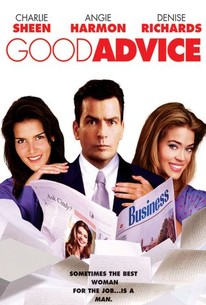 In this comedy, Ryan Turner (Charlie Sheen) is a successful young stockbroker whose life falls apart seemingly overnight when Donald Simpson (Barry Newman), the owner of a powerful media conglomerate, gives him some particularly bad advice about a certain stock; this might have something to do with the fact Ryan has been having an affair with Veronica (Lisa Rinna), Simpson's wife. Ryan loses his job, he finds himself banned from stock trading, and he's about to be evicted from his apartment when his live-in girlfriend Cindy (Denise Richards) decides to leave him to fly off to Rio with a new man. As Ryan tries to come up with a way to pay his rent, he gets a call from Cindy's boss; she writes a newspaper advice column, and it seems her copy is long overdue. Needing Cindy's paycheck to keep a roof over his head, Ryan begins writing her column for her, leading to a wealth of complications and misunderstandings. Good Advice also stars Jon Lovitz, Rosanna Arquette, and Estelle Harris.

...there's just never a point at which the viewer is drawn into either the high-concept storyline or the plight of the central character...

Not really bad, but just not good either.

Charlie Sheen playing a character not unlike Bud Fox but this time with a romantic comedy angle, teamed with his former fling Denise Richards, playing someone probably not unlike herself, in Good Advice. There's some good laughs to be had, and Charlie Sheen does a serviceable job, but Good Advice never rises above the traditional cliches. Still, it's an effective enough comedy to make it watchable. 3/5 Stars

This movie is cute and fun...a great movie when you want mindless entertainment with a little more substance. "Why did you kiss me?" "I didn't...I tripped." "What, and fell onto my face?"

I can't believe they have the gall to air this on a network called Comedy Central.