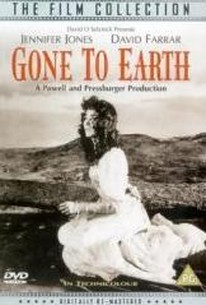 The brooding British romantic drama Gone to Earth is better known by its American title The Wild Heart. Filmed in England and cofinanced by David O. Selznick and Alexander Korda, the film stars Jennifer Jones (Mrs. Selznick) as Hazel Woodus, a tempestuous Welsh gypsy maid who can't seem to stay out of trouble. Feeling more of a kinship with woodland animals than with human beings, the Hazel enters into a loveless marriage with minister Edward Marston (Cyril Cusack). Believing she's been born under a curse which will punish her if she ever truly falls in love, Hazel does her best to suppress her carnal desires, but gives up the struggle when she begins an affair with rakish landowner Jack Reddin (David Farrar). Her inability to be mistress of her own fate leads to a spectacularly tragic denouement. Based on a novel by Mary Webb, Gone to Earth was cut from 110 minutes to 82 for its American release; the latter version included a narration by Joseph Cotten and several new scenes directed by Rouben Mamoulien. ~ Hal Erickson, Rovi

Joseph Cotten
as Narrator (US version)

Critic Reviews for Gone to Earth

Its bracing imagery still makes it worth a look.

It is difficult to know what to make of this film.

There's not much to recommend other than the stunningly beautiful photography.

Audience Reviews for Gone to Earth

A Great looking and superb acted film about a girl who can't choose between a good guy or a jerk. David Farrar gives a great performance. It would be a 4 star film if the ending would have been less preditable.