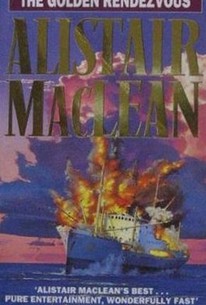 Richard Harris dodges bullets from stem to stern in this middling thriller, based on a novel by Alistair MacLean. The plot concerns high-sea hijinks aboard the Caribbean Star, a combination cargo ship and floating casino. In the midst of the high rollers and spinning roulette wheels appears Luis Carreras (John Vernon), an amoral mercenary who hijacks the ship. Taking his marching orders from a mysterious mastermind, he installs an atomic device mid-ship, holding both the passengers and the bomb hostage, hoping to exchange them for the gold bullion of an U.S. Treasury ship. All seems to be going according to Luis's plan until First Officer John Carter (Richard Harris), the attractive Susan Beresford (Ann Turkel), and Dr. Marston (Gordon Jackson) arrive to put a crimp in Luis's escapade.

Jack Cooper
as Attacker
View All

There are no critic reviews yet for Golden Rendezvous. Keep checking Rotten Tomatoes for updates!

There are no featured reviews for Golden Rendezvous at this time.