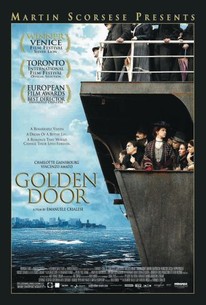 A family living in poverty leaves behind the world they know in hope of finding new opportunities in this historical drama from director Emanuele Crialese. The Mancusos are a family struggling to make ends meet in a small farming community in Sicily in 1913. Life has long been hard for the Mancuso Family, who have lived in the same village for generations, and one day they are visited by a man who claims to be from the United States. The man tells them of the wonder and plenty of life in America, an offers to make it possible for them to travel to the New World and find work there. The Mancusos cautiously accept the offer, but after a dangerous voyage aboard an ocean liner, the family arrives in New York to face a number of new challenges -- the humiliating examination at Ellis Island, and abandoning their old lives and ways as they struggle to assimilate in a massive city that is now their home. Starring Charlotte Gainsbourg, Francesco Casisa and Vincenzo Amato, The Golden Door (aka Nuovomondo) received its world premier at the 2006 Venice Film Festival.

Yes, the details are spot-on and realistic in the extreme. But we've seen them before. It's the story Crialese hangs this detail on that's weak.

Its minutiae don't bring a lump in the throat -- just a drumming of the fingers.

The film is touching, imaginative and makes the best of its cash through a minimalist skill that shows Crialese to be a genuinely original director.

The details of this chaotic odyssey to the New World are so intricately and poignantly handled that throughout a voice in your head insists: this is how it must have been.

Except during the pointed and crisply staged scenes of testing and quarantine, his movie feels thoroughly adrift.

His excellent new film gives us the fierceness without the syrup: a solidly constructed film with a brilliant visual sense, tremendous performances and an eloquent, dreamy sense of time and place. It held me in every frame.

Prince of the New World

I would imagine that if you have a close connection to Ellis Island immigrants, you will be similarly touched by this movie.

The film's cinematography by Agnès Godard is breathtaking at times, especially early on during exterior scenes.

Crialese presents enough historical detail to give many 2nd and 3rd generation Americans today an idea of what physical and mental scrutiny their grandparents might have been subjected to in order to be accepted through the "Golden Door."

The journey to America by an Italian peasant and his family, conveying their yearning for a new life in scenes of magical realism.

is all facade and no force

Golden Door is a miniature epic, tracking a Sicilian's family emigration to the USA. It starts much too slowly, and although characters are established, it is ill thought out - particularly the dream sequences, which could have provided an added insight.Once the action moves onto the voyage, however, and Charlotte Gainsbourg's character is introduced, an interesting story emerges, and this, combined with humorous touches, are what make the film bearable. It is well directed and shot, with the other lead character, Vincenzo Amato, also impressing.. 2 1/2 Stars 3-19-14

[font=Century Gothic]"Golden Door" is an intricately detailed yet ethereal movie about the journey of a group of Italian peasants to America around 1900. Hoping to be reunited with his brother in the New World, Salvatore Mancuso(Vincenzo Amato) travels with his sons Angelo(Francesco Casisa) and Pietro(Filippo Pucillo), along with his elderly mother(Aurora Quattrocchi). They are escorting two young women, Rita(Federica De Cola) and Rosa(Isabella Ragonese), who are going to the United States to marry men they have never met. Just as they are about to depart Italy, Lucy Reed(Charlotte Gainsbourg) enters the picture...[/font] [font=Century Gothic][/font] [font=Century Gothic]None of the emigrants have ever gone any distance beyond the village they were born in, so what makes them take such a perilous journey is the extreme poverty at home coupled with the fantastic promises of America which include money on trees, huge vegetables and rivers flowing with milk. They are not stupid, just lacking a proper education at a time when technology is not quite at a point to permit a free flow of information. All they have are postcards of a wondrous land.[/font]

Well-shot immigration drama ends on quite a peculiar note.