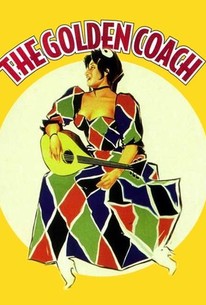 Set in 18th-century South America, The Golden Coach (Le Carrosse D'Or) stars Anna Magnani as an earthy Commedia Del Arte performer. Magnani is lusted after by diplomat Duncan Lamont, who leaves both his job and his mistress to pursue the sexy actress. Also vying for Magnani's favors are a bullfighter and a nobleman. Magnani tries to avert bloodshed by giving away the Golden Coach that had been bestowed upon her by the expansive Lamont. When director Jean Renoir was asked if he intended The Golden Coach to be Pirandellian, what with its linking of reality and theatricality, Renoir responded that his intention was to establish that "life is life and the stage is the stage." Maybe so, but the film's brilliant Technicolor and superb performances easily transcend that mundane entity known as Real Life.

John Pasetti
as Captain of the Guards

Cecil Mathews
as The Baron

Fedo Keeling
as The Viscount
View All

This was Renoir's second color film (after "The River"), and his directorial rhythm seems to falter in his work in color, but, given the film's glow and warmth, this defect is trifling.

As with all of Renoir`s films, it is impossible to define the tone of The Golden Coach, so smoothly does comedy shade into drama, joy into despair, warm optimism into cool cynicism and vice versa.

What the whole thing comes down to is a stunningly colorful show, in the middle of which looms Miss Magnani.

Exquisitely shot by Claude Renoir, this is one of the great colour films.

The eye never wants to laze, it is either excited or soothed, and M. Renoir leads it to follow exquisite patterns. What a brilliant director he is!

The Technicolor production is alive with color and energy and it bubbles with a vital performance by [Anna] Magnani...

It's an escapist theatrical comedy.

This superbly crafted masterpiece about life and art, with a charismatic performance from the great Anna Magnani as a temperamental actress, was made by Jean Renoir after returning to France from a decade in the U.S. and filming The River in India.

The Golden Coach is Jean Renoir's invitation to sit back and enjoy the colorful, romantic, humorous spectacle that is real life.

What we take away from The Golden Coach are its sumptuous look and the sense that a master director is opening up to us with some long-standing passions.

one of renoir's masterpieces. magnani is the perfect center for the many layered stories here. exceedingly clever set designs. a delight

Jean Renoir's foray into English is not terrible to behold but it barely captures interest. Feels dated and silly at times. A good performance by Anna Magnani however.