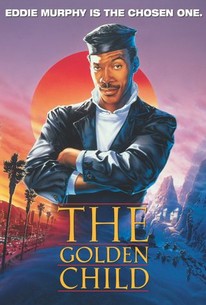 Eddie Murphy followed up his Beverly Hills Cop success with this fantasy adventure that plops him right into the land of Ray Harryhausen and Indiana Jones. The plot revolves around a God-like youngster (J.L. Reate) known as a "golden child," who has been sent to Tibet to bring the gift of compassion to humanity. But the devil isn't idle, sending his emissary, Sardo Numspa (Charles Dance) to kidnap the golden child. Sardo absconds with the child and takes off to Los Angeles. In L.A., a beautiful Tibetan priestess named Kee Nang (Charlotte Lewis) seeks out Chandler Jarrell (Eddie Murphy), a social worker and self-styled "finder of lost children." She tells Chandler he has been chosen to rescue the magical child from the devil and save the world from evil. Before Chandler can let go of his first riposte, he finds himself holding a magic dagger, following a sacred parakeet, and under-going several trials by fire. He also falls in love with Kee Nang, who at one point in the film has to be brought back from the dead. ~ Paul Brenner, Rovi

J.L. Reate
as The Golden Child

Victor Wong
as The Old Man

Randall "Tex" Cobb
as Til

Marilyn Schreffler
as Kala
View All

Critic Reviews for The Golden Child

A half-baked comedy without a heart.

This film -- insignificant and lightweight and monumentally silly -- is entertaining from beginning to end.

Not even Eddie Murphy's normal bag of tricks and tics can save this contrived and unconvincing film from self-destructing.

His posse told him he was god-like.

Indefensible rubbish with occasional flashes of invention and Victor Wong.

An uneven and staid mystical bore that miscasts Murphy something fierce. There's nothing Golden about this neglected Child.

An extremely amusing film from back when Murphy was still funny; it's been unfortunately mostly forgotten these days.

A mixed bag of occult mayhem that I remember liking as a kid.

Yet another in a long string of Murphy abominations.

Maybe being typecast as Axel Foley was a good idea

Audience Reviews for The Golden Child

Eddie is a private eye who has to find a kidnapped child.

[Re-watch] Movies may have moved on in terms of effects, but this is still an easy watching good prevails evil family film with comical input by Eddie Murphy.

early eddie was one of the best comedic actors in history. maybe a notch below some of his other eighties flicks, mostly because the film doesnt hold up as well, but this movie is still funny and a lot of fun to watch.