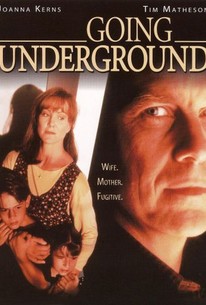 Originally broadcast as a prime-time telemovie in 1993, Going Underground re-explores a thematic landscape charted on the big screen by Sleeping with the Enemy (1991). Joanna Kerns (Cross My Heart, Growing Pains) is Maryanne Walker-Tate, suburban housewife to Daniel (Tim Matheson) and mother of two, Josie and Jason. But all is not domestic bliss. In public, Daniel charms to the point of perfection; behind closed-doors, he's a psychotic brute and a sadist who enjoys turning his family's life into a waking death dream. Now, Daniel drums up phony allegations of abandonment that force the seemingly content Maryanne down a one-way path; she snatches the children up and they flee from Daniel, assuming new lives and new identities in another town. But soon, Daniel discovers his family's whereabouts, and heads straight for them, hell-bent on an ugly onslaught of retribution.

There are no critic reviews yet for Going Underground. Keep checking Rotten Tomatoes for updates!

There are no featured reviews for Going Underground at this time.