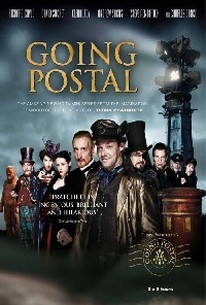 As a three-hour miniseries (adapted from Terry Pratchetts novel of the same name) that originally aired on Britain's Sky One television, Going Postal (2010) unfolds in the fictional land of Ankh-Morpork. Standing center stage is Moist von Lipwig (Richard Coyle), a master con artist who spends his days devising elaborate scams to fleece locals. The law finally catches up with Moist in the form of Lord Vetinari (Charles Dance), who offers the criminal an odd ultimatum: he can either take over the derelict post office, or die a long and painful death. Moist chooses the former, and is soon put in charge of thousands upon thousands of undelivered letters and packages. He must also contend with a nutty staff and the doings of Reacher Gilt (David Suchet), a crooked businessman hell-bent on destroying his competitors. Also present is Adora Dearheart (Claire Foy), an ice water-veined woman for whom Moist falls. ~ Nathan Southern, Rovi

There are no critic reviews yet for Going Postal. Keep checking Rotten Tomatoes for updates!

There are no featured audience reviews yet. Click the link below to see what others say about Going Postal!