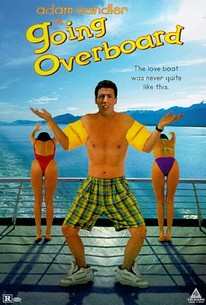 Two years before he joined the cast of Saturday Night Live, Adam Sandler starred in this comedy as Shecky Moskowitz, who wants to get a job as a comedian on a cruise ship, but when that job is taken, signs on as a waiter instead, hoping fate will lend a hand. The cast also includes Burt Young, Peter Berg, Billy Zane, and a then-unknown Billy Bob Thornton. ~ Mark Deming, Rovi

...a slapdash and thoroughly amateurish piece of work that suffers from a total dearth of positive attributes.

When a star becomes really successful, the public is inundated with every scrap of celluloid he ever worked on as he learned his craft, and such is the case with this Adam Sandler vehicle.

Couldn't get this one banned, Sandler?

Adam Sandler stars in this "no-budget" (a self-described disclaimer at the film's beginning) comedy from writer/director Valerie Breiman. It's simply a very loose plot involving a cruise ship, beauty queens, and an aspiring comedian; basically an excuse for lots of bad jokes. Filmed during the same period he appeared on MTV's game show Remote Control, the other aspect of this film remotely (pun intended) interesting is a peek at the very young star. The plot concerning Gen. Manuel Noriega's (Rocky's Burt Young) revenge against Miss Australia is so stupid it detracts from the gags. An interesting bonus is the inclusion of actors who became well-known later and a few other notables. Billy Bob Thornton, Billy Zane, director Adam Rifkin, and Sandler friend Allen Covert show up, as well as 50s icons Milton Berle and Terry Moore.

Despite the interesting choice of cast line up, and the fact that it's Sandler's first film, this movie was pretty bad. You're probably wondering why I even gave it two and half stars. Well, because I actually enjoyed some parts, and Sandler himself was a charming young man. Overall, though, I wouldn't recommend it unless you're a die hard fan of him.

You will want to jump overboard half way through the moive.

Movies pretty horrible, even for a low-budget film. It's seriously hard to get any worse. Adam Sandler is the man, but, this movie did what it was titled.. it went overboard, way before it started going!