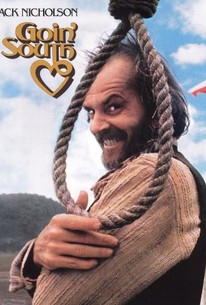 Sentenced to hang in a backwater western town, horse thief Henry Moon (Jack Nicholson) is saved when frontierswoman Julia Tate (Mary Steenburgen) agrees to marry him. Taking advantage of the town law that prohibits the execution of married men, Moon follows Tate back to her ranch, planning all the while to escape at the first possible opportunity. But Tate insists that he honor his end of the bargain at work on the ranch. She has no intention of consummating the union, a fact that drives the hot-to-trot Moon up a wall. She puts him to work on the gold mine that she has on her property, while his old gang prepares to relieve the couple of their gold once it's on the surface. Jack Nicholson personally selected movie newcomer Mary Steenburgen for Goin' South. The film also features John Belushi in the role of a dyspeptic deputy.

Loren Janes
as Passenger
View All

Goin' South is the most flat-footed comedy to collapse on the screen since Nickelodeon.

Jack Nicholson playing Gabby Hayes is interesting, even amusing at times, but Hayes was never a leading man, which Goin' South desperately needs.

Jack Nicholson is hilarious in this underrated comedy Western.

Nicholson does a markedly better job with the material than anyone could have expected.

Goin' South is a gritty Western with plenty of spunk.

A waste of time. One to avoid - especially if you're a fan of the frequently spectacular Jack Nicholson.

With the Nicholson signature, it keeps on rolling, at least for the first hour and change before the story moves in the wrong direction.

This comedic western romance concerns a third rate criminal named Henry Moon, who, moments before he is to be hanged for horse thievery, is saved, thanks to a law in the backwater Texas town, allows for a woman to save a criminal from death, barring she agrees to marry him and take responsibility for his behavior. And that's what happens: Julia Tate claims the grateful Moon who soon regrets the arrangement when it's revealed she only really wants to use him as manual labor for a gold mine she swears is on her property. Aside from that, Moon also has problems with the Sheriff. Not only does he not care for Moon to begin with, but he also feels like Moon took Julia away from him, viewing her as "his girl". Featuring an all star cast, and directed by its star Jack Nicholson, this had potential to be an absolute riot. Unfortunately, while the film starts off strong, it devolves into an uninspired bore and never quite recovers. There are some good moments here and there, but there's not really enough to save this from being a generic "meh" kind of film. This is a top notch cast who, besides Nicholson includes the likes of John Belushi and Mary Steenburgen in their film debuts, he as a deputy, she as Julia, and CHristopher Lloyd as the sheriff. There's also appearance by Ed Begley, Jr., Veronica Cartwright, and Danny DeVito. Nicholson and Belushi really ham it up and appear to be having a lot of fun, but Lloyd, while okay, could have been even better. I like Mary Steenburgen alright, but she's not all that good hear. Granted, it is her first film, but still, she's kinda awful. At least we get a brief glimpse of her nipples through a wet shirt... I really wanted to like this movie, and, even though I did enjoy it in parts, as a whole, it's a real disappointment. Unless you're a completist for anyone in the cast, I don't really recommend this.

I like that Doc Brown and Claira are together again in the old west. Jackie boy does a fun job as well.

Enjoyable comic western starring and directed by Jack Nicholson. Without anybody to rein him in, he hams it up mercilessly, but being Jack, he can get away with it in a way that very few can.