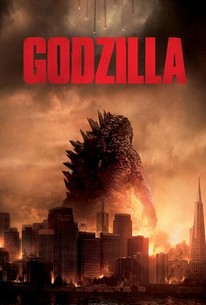 In Summer 2014, the world's most revered monster is reborn as Warner Bros. Pictures and Legendary Pictures unleash the epic action adventure "Godzilla." From visionary new director Gareth Edwards ("Monsters") comes a powerful story of human courage and reconciliation in the face of titanic forces of nature, when the awe-inspiring Godzilla rises to restore balance as humanity stands defenseless. (c) Warner Bros

Primo Allon
as Mine Team Member

Lise Krivatsy
as Mother on Beach

Every time Edwards' Godzilla rears up, you stiffen with excitement. Every time he roars, Edwards wants you to feel it and wince.

There's something rather heartening about the fact that Warner Brothers was prepared to hand over the reins of a stonking great blockbuster (and, lets face it, a potential money-spinning franchise) to a sophomore director.

This is what you get, San Francisco, with all your douchey, flashy, dot-com money: You get stomped on by Godzilla.

Godzilla handles everything the military hurls at him: ships, guns, planes, rockets, even a squadron of HALO paratroopers. The only thing that can cut him down to size is being relegated to a supporting role in his very own movie.

The beasts just want to have fun, but the gravest letdown in Edwards's film is that, most of the time, he fends off the chance to have fun himself.

Fortunately, this new version is miles better than the last time a Hollywood director tried his hand at bringing the Japanese monster to life.

While it has its problems - the most severe of which is Aaron Taylor-Johnson's performance - you can forgive it because, well, it's Godzilla fighting another giant monster. What more can you ask for?

Repent! The end is nigh! For unto them shall come a lizard with a beer belly, barfing atomic breath and bringing despair and sadness to Heisenberg from "Breaking Bad!"

It is well worth seeing on the big screen.

Instead of numbing us with monster action, Edwards teases us, stringing us along before finally hitting us with the epic payoff. And boy is it ever worth it.

Though a lovingly-made and (relatively) worthwhile franchise update, the Nolanesque seriousness becomes pointless and distracting.

Now Godzilla is considered one of the most well known of giant monsters and has the longest running film series ever made (30 movies in 60 years), but Godzilla has never really been a film series to take itself that seriously (except with the first one). But here Godzilla is not only a very serious film, it's probably one of the best films of the summer, and for that to be a Godzilla film, is saying a lot. First Acting. Now with past Godzilla films everyone constantly makes fun of the dubbing and how the words never match the lips and it looks really cheesy, so I was happy with here the film primarily has an all english speaking cast. Aaron Taylor Johnson plays the main character, which may disappoint some as Bryan Cranston seems to be the main character since all the trailers show him the most. Johnson does a fantastic job here, playing a soldier who specializes in bombs who has been dragged along on this since he and his dad witnessed the Muto escape, and now Dr. Ishiro needs his help after the creature gets out since he has some of his dad's knowledge. All the other actors do great jobs as well. David Stratham and Ken Watanbe both do fantastic jobs in the film. Stratham does a good job at playing the general character, and thankfully the character isn't a generic loud mouthed general like we've seen in other films like this, and Watanbe is very good as being the calm and collected scientist Dr. Ishiro, who knows much about Godzilla and understands what Godzilla has to do and tries to find a way around interfering with him. Bryan Cranston, while not being on screen for more than 25 minutes, does a very good job as usual, being this nervous wreck of a genius who is trying to solve the mystery as to why the nuclear plant he worked at had collapsed, killing his wife, and thinks he has the answers to it. Also cool little tidbit, pay attention to the american man who is with Cranston at the nuclear plant at the beginning, because when I saw him I had the biggest geeky smile on my face. I'll just say, this canadian voice actor has had experience with monsters before, especially robots in disguise ;) . Now action and effects. When I heard Godzilla was going to be CG I was hoping that he would look faithful to the design of the original and would still move and look like he has some weight to his movement, and thankfully, he looks fantastic. Not only that but the CG in general looks amazing. The Muto's designs are very cool to look at, the scenes of destruction look very realistic and the monster fights are just flat out amazing to watch. While you don't see a lot of Godzilla until the last 20 minutes, it's definitely worth it to that point, because you see a lot of the Muto throughout the film. There is also some very good suspense and buildup to several of the monster scenes, the best one being when Aaron Taylor Johnson and another soldier are hiding on some train tracks trying not to be seen by one of the Muto who is slowly lurking around the tracks. Also the last fight scene, is the most suspenseful and awesome fight I've ever seen in a monster movie. In my theatre during the end of the fight there is two moments that I won't spoil but I'll just say, my whole theatre applauded when they happened. I saw this movie in IMAX and 3D and scenes like that are well worth it the price. Overall, Godzilla is not only a very good summer blockbuster, I think its the best movies I've seen this year so far. The action is fantastic, the effects are top notch, the acting is incredible, and it's entertaining as hell. My words can not do this film justice, just see the movie for yourself and make your own conclusion. My final rating 4.5*s out of 5

When it comes to monster movies, very few have given enough substance to become masterpieces. Aside from classics like Frankenstein or the original Godzilla, there really hasn't been a modern-day monster film that shines. They were rejuvenated in the 1980s when films like Jaws or Alien were released, but this particular genre has been dead for quite some time. While this incarnation of Godzilla was by no means great, I found myself quite enjoying my experience with this version of the classic monster. That being said, upon recent viewings, it has begun to die off. Still holding many moments of greatness, there is just something too simplistic and uninteresting with this story and its characters. Here is why 2014's Godzilla is a great monster movie, but an average movie overall. When it comes to blockbuster movies, screenplays never seems to really be finished. Unless you have a set story, there really is no telling when the studio will finally "O.K." a draft. When looking back on this film, I genuinely wonder what writer Max Borenstein was thinking when he came up with this premise. There really isn't much to this story. Thinking they killed the monster back in the 1950s, he rises up again, but he is not alone. That is literally the plot, along with some disposable side characters throughout most of this film. Godzilla is the backdrop and really doesn't do anything until the final ten minutes of this picture. There have been plenty of great films to only feature its creature in the final moments, but they have also contained fantastic characters. Godzilla is a bunch of disposable characters running away from a monster that is hardly ever shown, but the wait is most definitely worth it, which is frustrating. Without giving anything away for those who have yet to see this film, Godzilla begins with a few main characters, most of which are disposed of and killed off in the first act of this film. That right there is cause for concern. Aaron Taylor-Johnson and Elizabeth Olsen have a bit of likability when on-screen together, but that is completely thrown away, focussing almost solely on Johnson's portrayal of Ford, who is placed right in the middle of the chaos, because he is the only who who can diffuse a bomb. Yes, a film like this needs a level of realism and people to relate to, but the people you can relate to are left on the sidelines, while the main focus is on people that have no problem pulling off the impossible. There were many imbalances in my opinion. The main reason audiences go to see a Godzilla film is obviously to see Godzilla, and although there really isn't all that much of him here, his presence is more than worth the wait. The visuals of him are spectacular and his action sequences are action-packed. The fact that the sequences involving Godzilla are note-worthy, I can say that this film is worth checking out, but that is about the biggest compliment this film can be given. When a film promises a giant monster, it needs to deliver on that aspect tenfold, and if you are patient enough, I believe that it does. For the action sequences alone, this is a very solid film, but that is where its greatness ends, sadly. Back in 2014 when I was sitting in the theatre experiencing this film for the first time, I found myself incredibly entertained. Sure, the flaws were presents, but I was very forgiving of them, due to the awesome sequences in the finale. That being said, that excitement has sadly died down a bit. The finale is still incredibly awesome to experience, but the film leading up to that just feels too dull and slow. There isn't much of a story and the characters are pretty uninteresting for the most part, but it's worth the wait. In the end, I still mildly enjoy this film as a whole, but the only portions to love are the ones that include the monster in the forefront, which isn't often enough. For all of these reasons and more, 2014s Godzilla is extraordinarily average.

Despite the talented director and cast, this is an incredibly dull and poorly directed movie with serious pacing issues, empty characters and blatant incoherences, while its original raison d'être as an allegory is simply discarded in favor of a forgettable, pointless reimagining.

A return to glory for "Godzilla" after recent stumbles but when Cranston's not on screen, the humans become a chore to listen to or care about. Could've benefitted by having more Godzilla on screen, but nevertheless not a complete waste of time