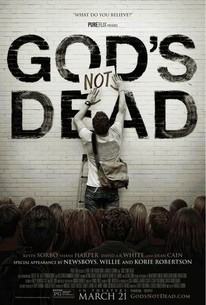 Critics Consensus: Deploying sledgehammer theatrics instead of delivering its message with a dose of good faith, God's Not Dead makes for bad drama and an unconvincing argument to the unconverted.

Critics Consensus: Deploying sledgehammer theatrics instead of delivering its message with a dose of good faith, God's Not Dead makes for bad drama and an unconvincing argument to the unconverted.

Critic Consensus: Deploying sledgehammer theatrics instead of delivering its message with a dose of good faith, God's Not Dead makes for bad drama and an unconvincing argument to the unconverted.

Present-day college freshman and devout Christian, Josh Wheaton (Shane Harper), finds his faith challenged on his first day of Philosophy class by the dogmatic and argumentative Professor Radisson (Kevin Sorbo). Radisson begins class by informing students that they will need to disavow, in writing, the existence of God on that first day, or face a failing grade. As other students in the class begin scribbling the words "God Is Dead" on pieces of paper as instructed, Josh find himself at a crossroads, having to choose between his faith and his future. Josh offers a nervous refusal, provoking an irate reaction from his smug professor. Radisson assigns him a daunting task: if Josh will not admit that "God Is Dead," he must prove God's existence by presenting well-researched, intellectual arguments and evidence over the course of the semester, and engage Radisson in a head-to-head debate in front of the class. If Josh fails to convince his classmates of God's existence, he will fail the course and hinder his lofty academic goals. With almost no one in his corner, Josh wonders if he can really fight for what he believes. Can he actually prove the existence of God? Wouldn't it just be easier just to write "God Is Dead" and put the whole incident behind him? GOD'S NOT DEAD weaves together multiple stories of faith, doubt and disbelief, culminating in a dramatic call to action. The film will educate, entertain, and inspire moviegoers to explore what they really believe about God, igniting important conversations and life-changing decisions. --(C) Official Site

Lisa Hampton
as Actress
View All

Critic Reviews for God's Not Dead

Despite the campus setting, little about the story is intelligently designed.

Even by the rather lax standards of the Christian film industry, God's Not Dead is a disaster.

The film is slickly produced, with a competent cast, and although it sometimes stacks the deck shamelessly in defense of its credo, it does allow a few dissenting voices to slip into the debate.

The Almighty deserves better advocacy than he gets in this typically ham-fisted Christian campus melodrama.

The film wants to use science to prove the existence of God while also debunking all science and discrediting all scientists.

The result is a film that is terribly one-sided and in many ways off-putting despite the promise to provoke debate.

God's Not Dead, despite excellent production values, leaves scant room for the imagination or mystery. It is a contrived, implausible Sunday school lesson...God, whom people seem to think needs defending, deserves better from the artistic community.

This is awful filmmaking, from trite writing of one-dimensional characters to even triter (which spell-check is telling me is not a word) dialogue.

Will likely get a mildly, if unenthusiastic, passing grade from its target audience, but for the non-believers, it's going to prove a tough and condescending experience.

Has a decided agenda but still manages to be entertaining

Audience Reviews for God's Not Dead

One of the most overstuffed and shallow screenplays in cinema history is complimented with some terrible visuals and some horribly one-sided messages that will be offensive not only to minorities, but also potentially Christians. God may not be dead, but with this movie, it sure seems like good cinema is.

Do casting directors have to go to special agencies to assemble a cast so bereft of talent? This film is probably best appreciated by those who have not been to college and have no need for intellectual conversations with others.

It's a little corny, but God's Not Dead has a positive message about standing up for one's beliefs. Based on a series of court cases where colleges have infringed upon students' religious liberties, freshman Josh Wheaton takes up his philosophy instructor's challenge to prove that there's a God; and in doing so he starts a ripple effect that spreads throughout his community. The acting's pretty poor all around, and the writing's not that good either. Yet it's rather interesting how the story plays out and interconnects the different characters. And, there's an inspirational quality that comes through as well. Though it has some problems, God's Not Dead ends up being more than the sum of its parts.