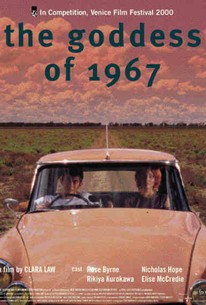 Two young people with little in common are thrown together under unusual circumstances in this offbeat drama directed by Clara Law, who made a number of well-received films in Hong Kong before emigrating to Australia. Yoshiyashi (Rikiya Kurokawa) is an expert computer hacker and snake enthusiast who travels to Australia from his home in Tokyo to buy the car of his dreams -- a perfectly restored 1967 Citroen DS. However, when Yoshiyashi arrives at the home of the man selling the car, he makes a shocking discovery -- the owner has killed his wife and turned the gun on himself, leaving behind Deidre (Rose Byrne), the man's niece, who is both blind and emotionally unstable. As it turns out, the Citroen is still for sale, but now Yoshiyashi must make his deal with one of the man's relatives, who lives a five-day drive away. Yoshiyashi brings Deidre along for the ride, who in the course of the trip learns a lot about Yoshiyashi's studied cool, while he gets clearer perspective on the troubled past behind her impulsive eccentricity. The Goddess of 1967 was shown in competition at the 2000 Venice and Toronto film festivals. ~ Mark Deming, Rovi

Critic Reviews for The Goddess of 1967

I get the sense that if this film really clicks with you, it is something that you'd really love and hold dear. I, on the other hand, just couldn't get into the film.

You may be surprised to find yourself revisiting key scenes for days afterwards.

Audience Reviews for The Goddess of 1967

A staggering blending of alternative values where orientation is lost even by the ones who aren't blind.Law torches sensitivity by deleting the primal instincts of any such conceptual difference,her body of work is (whatever the case may be) a research of emotional behavior through any series of events.Sexual desire is not restrained to just a physical grasp,it also motivates viewers to empathize,yell,express disappointment over the injustice in both characters' revision of their lives.A Man and a Woman,unidentified as is the case with most of us,wanderers of a worldwide outback.

Clara Law photographs a journey into wilderness, and very carefully, step by step, she brings to light the protagonist's sordid past of sexual abuse. Rose Byrne looks like she was made for this part. She shines throughout the film, and makes this difficult journey, worthwhile. It's not an easy film to watch, but it rewards you, with the wide mystifying shots of the wild landscape, and the charm of the "Goddess". Essentially, it feels like you're looking at two different films, until the two protagonists meet. His story, and her story. Luckily, in the end, the journey is theirs, both.