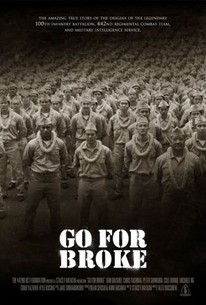 Fighting not only the Germans, but rampant racism at home in the US and in the military, the brave Japanese Americans in the 100/442nd went on to be the most decorated unit for their size and time in battle in U.S. History. On this, the 75th anniversary of the Japanese Incarceration during WWII, this timely movie explores the complex emotional framework that allowed these young men to serve their country while their families were incarcerated or lived under martial law all in a bid to prove their loyalty and "Americanness" to those who doubted it.

Critic Reviews for Go for Broke

There are no featured reviews for Go for Broke at this time.