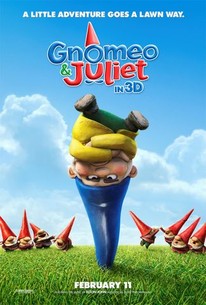 Critics Consensus: While it has moments of inspiration, Gnomeo and Juliet is often too self-referential for its own good.

Critics Consensus: While it has moments of inspiration, Gnomeo and Juliet is often too self-referential for its own good.

Critic Consensus: While it has moments of inspiration, Gnomeo and Juliet is often too self-referential for its own good.

The greatest love story ever told, starring...garden gnomes? In the upcoming "Gnomeo & Juliet," Shakespeare's revered tale gets a comical, off-the-wall makeover. Directed by Kelly Asbury ("Shrek 2") and showcasing both classic and original songs by Elton John, the film features the voices of James McAvoy and Emily Blunt as Gnomeo and Juliet, who have as many obstacles to overcome as their quasi namesakes when they are caught up in a feud between neighbors. But with plastic pink flamingos and thrilling lawnmower races in the mix, can this young couple find lasting happiness? Two garden gnomes, Gnomeo (voice of James McAvoy) and Juliet (voice of Emily Blunt), try to avoid tragedy and find a happy ending to their star-crossed love affair when they are caught up in a feud between neighbors. -- (C) Disney

Maurissa Horwitz
as Call Me Doll

Emily Blunt
as Juliet
View All

News & Interviews for Gnomeo and Juliet

View All Gnomeo and Juliet News

Critic Reviews for Gnomeo and Juliet

"Toy Story" goes Shakespearean in this animated retelling of the tale of the star-crossed lovers of Verona.

Gnomeo & Juliet stays too low to the ground to become an animated classic, but if there's a fairer midwinter's tale, wherefore art thou?

Uneven is the course, as the Bard might say, but the ride is plenty of fun.

A lot of thought, love and (on the part of the animators) hard work has gone into this picture...

Sadly, the music is largely wasted on the material, as somehow gnomes racing a lawnmower doesn't organically translate to a song about fighting and getting a little action in.

A fantasy for the ages, for all ages. Laugh out loud funny, touching, sweet, tender, filled with action for the boys (and girls).

Gnomeo & Juliet will leave youngsters not much the wiser about the Bard, but if amusing and occasionally inspired silliness with a good heart is what's wanted, it can be found here.

Truly, Gnomeo & Juliet has to be regarded as one of the worst Shakespeare adaptations of all time

This film turns the wackiness dial up high.

3D technology is highlighted in lawn mower racing and in some water scenes... [Full review in Spanish]

A passable afternoon's entertainment this film brings, Though somewhere Shakespeare is banging his head.

Audience Reviews for Gnomeo and Juliet

I'm not a person who likes Shakespeare's work, which some may find shocking, but I find his work just uninteresting and hard to figure out what the hell is going on, but I found this film Shockingly, and I MEAN SHOCKINGLY good. Sure it isn't the best animated film I've seen, and there are a lot of unfunny and stupid jokes, but the animation is nice, the music is well composed, and the characters are interesting and likable (Except the frog), and the pacing and action is actually pretty decent.

Interesting and cute twist on a classic story, even though it's a bit generic.. I don't mind all the Elton John music! The animators did a good job with the garden plants and plaster texture of all the garden Gnomes. It's odd how solid statues can become so flexible without cracking. The 3D is sort of cool, but not essential. It's a bit odd how none of the neighbours notice anything going on in the alleyway. The movie poster is terrible with the Gnome stuck upside down in the grass. I enjoyed the sweetness of this movie candy, but wouldn't want to eat it too often.

Sweet cartoon tale based (obviously) on William Shakespeare's tragedy Romeo and Juliet. Blue Gnomeo and red Juliet are figurines on adjacent lawns of neighbors who despise each other. They meet and fall in love despite the fact that the blue and the red garden gnome families are not on friendly terms either. Little known Starz Animation Toronto is responsible for this colorful computer animated comedy. Yes comedy, as liberties have been regrettably taken to lighten up the source play. Additionally, the production lacks the detailed facial expressions that usually highlights these productions. All of the gnomes have sort of the same generic features. Their repetitive countenances lack the distinction needed to engage the viewer. The production does feature an impressive array of British talent that includes James McAvoy and Emily Blunt as the lead characters. There's also a plastic garden frog named Nannette, Juliet's best friend, who is a notably goofy side character. But it's ironic that the funniest voice belongs to American wrestler Hulk Hogan as an announcer that commands internet shoppers to purchase the Terrafirminator lawn mower: "It's a weapon of GRASS destruction!" The story could have used more funny bits like that. Regardless, this was a sleeper hit and it's not too hard to see why. Innocent family offering is just pleasant enough to entertain the whole family.

"Gnomeo smashed Tybalt!" I was so tickled by the fact that, despite the rather dark content of the famous story, this film never lets you forget that the characters are garden gnomes. In case you do, there's a terracotta pottery clink that accompanies every high-five or kiss. It's hard to get invested in the gravity of a situation where pottery characters murder each other by smashing someone. I originally wanted to see this for Jason Statham, who was a stroke of casting genius as a voice actor. Actually, everyone is good in this, and I for one am more than willing to forgive the huge liberties that the story takes. The departures from the text are many and massive, including the tragic end. I guess that tragedies and children's film don't really go together.