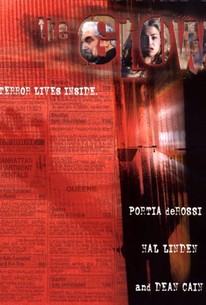 Based on the novel by Brooks Stanwood, The Glow stars Dean Cain and Portia de Rossi as Matt and Jackie Lawrence, an affluent yuppie couple with two beautiful children. Rounding out their success story, the Lawrences move into a gorgeous New York apartment, where they soon discover that their neighbors are all elderly -- and all incredibly healthy. It is only after the neighbors make the couple an offer they can't refuse that Jackie realizes the grisly horror awaiting her family in their "dream" home. Not dissimilar to Rosemary's Baby, the made-for-TV The Glow was supposed to have aired during the fall of 2001, but for various reasons (including an unofficial post-9/11 moratorium on suspense films set in New York) the film did not make its Fox Network bow until August 30, 2002.

Yanna McIntosh
as Catherine
View All

Critic Reviews for The Glow

There are no critic reviews yet for The Glow. Keep checking Rotten Tomatoes for updates!

Audience Reviews for The Glow

This was a really weird movie. A young couple in New York meet some elederly people while they are jogging and are offered a cheap luxury apartment with elderly neighbours. The young couple move in to this apartment and they soon discover that something fishy is going on, because the elderly neighbours are acting very strange. When another young couple dissappear from the same building they begin to suspect a crime. Those elderly people really creeped me out.