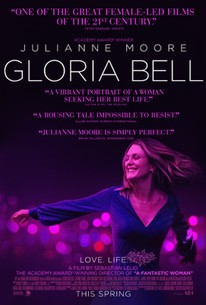 Critics Consensus: Free of visual or narrative embellishments, Gloria Bell rests almost completely on Julianne Moore's performance in the title role -- and she's gloriously up to the task.

Critics Consensus: Free of visual or narrative embellishments, Gloria Bell rests almost completely on Julianne Moore's performance in the title role -- and she's gloriously up to the task.

Critic Consensus: Free of visual or narrative embellishments, Gloria Bell rests almost completely on Julianne Moore's performance in the title role -- and she's gloriously up to the task.

Gloria (Julianne Moore) is a free-spirited divorcée who spends her days at a straight-laced office job and her nights on the dance floor, joyfully letting loose at clubs around Los Angeles. After meeting Arnold (John Turturro) on a night out, she finds herself thrust into an unexpected new romance, filled with both the joys of budding love and the complications of dating, identity and family.

Gloria Bell is somewhat exhausting - both unbearably intimate and at a constant remove - but it is endlessly pulled back into focus by Moore.

The result isn't better than the 2013 original but it's just as good.

Whether she's dealing with conflicts at work, doing laugh therapy sessions, or smoking weed on the floor of her apartment while the Californian sunlight slants through the window, this is a Bell that chimes.

There are low moments, flat moments and unconvincing moments - but Gloria deserves to be protected at all costs.

The thumping heart of all of it is Moore, whose magnetically watchable, fully inhabited, offhandedly sexy performance makes Gloria Bell's reflective longueurs shimmer...

Best musical of the year. Julianne Moore in a take no prisoners transformative rebel middle age makeover. And with lots of self-celebratory, breathlessly expressive emancipation in this somewhat feminist musical too.

Bringing a free-flowing and European cinematic style to tell the story of a modern American woman, Gloria Bell will have you rooting and swooning for its title character as she tries to be the auteur of her own biopic.

Moore's performance in Gloria Bell is Oscar worthy and she is surrounded by a solid group of actors who help her to shine.

Once her dating life blossoms after meeting Arnold, played by John Turturro, the film constantly weaves in and out losing it's cohesiveness.

Lelio creates a luminous new version although one can't help but feel they have seen this before. [Full review in Spanish]

Thanks to the strength of the cast and the intense and refined leadership of Lelio, who adapts to the new times with renewed energy and an attentive look at the feelings of this woman, is not less than its predecessor. [Full Review in Spanish]

ANOTHER FANTASTIC WOMAN - My Review of GLORIA BELL (4 Stars) I never saw GLORIA, writer/director SebastiÃ¡n Lelioâ(TM)s Chilean original from 2013, and I was no fan of his last feature, DISOBEDIENCE, but hereâ(TM)s a filmmaker who has so far dedicated himself to exploring the lives of some wonderful women. GLORIA BELL, his American remake, has made me a fan, with Julianne Moore putting in an unforgettable performance as a lonely, divorced, middle-aged woman who literally finds her voice by learning to love herself. Whatâ(TM)s not to love? When Gloriaâ(TM)s not singing along to 70s and 80s hits in her car (AIR SUPPLY! OLIVIE NEWTON JOHN!), she dances her nights away at some disco for the older crowd which Iâ(TM)m sure does not exist in LA! At first, I thought the film was set in the early 80s until we see Gloria on her iphone at her insurance actuary job. She has a couple of grown children who no longer need her, a remarried ex-husband, and a group of friends who all have partners. Whatâ(TM)s a single gal to do? The obvious storytelling solution would be to have her meet her dream man and live happily ever after. Lelio, however, has more smarts than that. Yes, she meets a man on one of her nights out named Arnold (a soulful, complicated performance by John Turturro), but he has issues of his own which prevents this from becoming a fairy tale. Think AN UNMARRIED WOMAN, the great Jill Clayburgh vehicle, but with more music and a sharper, more nuanced look at what a single woman experiences. Or think LOOKING FOR MR. GOODBAR without the judgment and the knife stuff. Although often comedic, GLORIA BELL takes a serious look at its titular character. Lelio favors an elliptical style, presenting Gloriaâ(TM)s life in little snippets. Almost completely devoid of Oscar-baiting showy moments, the film instead stays laser focused on Gloriaâ(TM)s ever-shifting moods and thoughts. We learn so much from her micro-expressions rather than through overwritten, self-righteous monologues, which have historically been the methods used in films of this ilk. Lelio clearly respects his audience as well by allowing so much to happen off camera or out of frame. No need, for example, to see a drunken suitor (Sean Astin in a small yet fascinating turn) fall off a merry-go-round when we can stay on Gloriaâ(TM)s face and merely hear his body go âthumpâ? offscreen. Itâ(TM)s this approach which forces the audience to live right there with Gloria, every step of the way. You canâ(TM)t help but empathize with this woman who endures her loud apartment neighbor, a stray cat hellbent on home invasion, and a life which has seemingly passed her by and left her for dead. Youâ(TM)ll thrill to the tiny yet believable baby steps Gloria takes to get to the point where she lives her life out loud. Lelio undercuts her one big showy moment in the film by involving a ridiculous prop as her revenge motif. It keeps the movie grounded and unpretentious. By the time you reach the perfectly calibrated final scene, you just may want to join Team Gloria. Moore, an actor incapable of giving a bad performance, wowed me here. Gloria feels like someone you either know or want to know. Sheâ(TM)s awkward, sensitive, and a little out of step with the world. Sheâ(TM)s vividly real. Sheâ(TM)s the opposite of an LA phony and if thatâ(TM)s not worth celebrating, then take away my Laura Branigan records and send me back to Ohio.