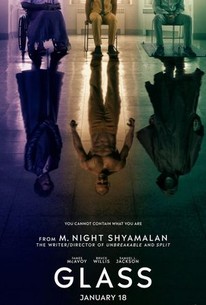 Critics Consensus: Glass displays a few glimmers of M. Night Shyamalan at his twisty world-building best, but ultimately disappoints as the conclusion to the writer-director's long-gestating trilogy.

Critics Consensus: Glass displays a few glimmers of M. Night Shyamalan at his twisty world-building best, but ultimately disappoints as the conclusion to the writer-director's long-gestating trilogy.

Critic Consensus: Glass displays a few glimmers of M. Night Shyamalan at his twisty world-building best, but ultimately disappoints as the conclusion to the writer-director's long-gestating trilogy.

From Unbreakable, Bruce Willis returns as David Dunn as does Samuel L. Jackson as Elijah Price, known also by his pseudonym Mr. Glass. Joining from Split are James McAvoy, reprising his role as Kevin Wendell Crumb and the multiple identities who reside within, and Anya Taylor-Joy as Casey Cooke, the only captive to survive an encounter with The Beast. Following the conclusion of Split, Glass finds Dunn pursuing Crumb's superhuman figure of The Beast in a series of escalating encounters, while the shadowy presence of Price emerges as an orchestrator who holds secrets critical to both men.

This may not be M. Night Shyamalan's worst movie, though it's surely his most disappointing.

It's good to have him back. It's a great looking film, it's great storytelling, and again he really takes his time.

There are a few thoughtfully placed cameras and thrilling moments - Bruce Willis vs. a door, for one - but they're not nearly enough to make this self-conscious live-action comic book worthwhile.

Hollywood and its superhero franchises are all but coextensive, and Shyamalan's confrontation with the ubiquity, popularity, and dominance of superheroes gives "Glass" a second-level urgency.

You have to admire Shyamalan's efforts to deconstruct a genre that he evidently loves, yet there is just so little to haunt or to fool us in the result, and a few sharp laughs might have helped his cause.

Glass is a terrific and fitting conclusion to the trilogy ... Yet, don't expect some action-packed extravaganza filled with monumental set pieces and explosive fight sequences. This is the Unbreakable universe, after all.

While the realistic superhero film is beyond ubiquitous these days, Glass provokes as it proves there are still new ways to tell these stories and, more importantly, that they are still worth telling.

I was frustrated the whole time.

Glass was a little too pretentious.

It's a solid package.

After the fantastic Unbreakable and the great Split Shyamalan goes and ruins the two films with a half-baked, boring and ludicrous finale. McAvoy gets to shine with his split personalities again, while Willis simply doesn't get anything to do. Even the soundtrack is dull when it doesn't quote the outstanding score of the first film. But the biggest insult after a pretty uninteresting setup is the oddly staged and pathetic showdown, which should piss off anyone who admired the beginning of this trilogy. The very final twist doesn't turn it all around. One of the biggest let-downs of recent years.

In a shameless bid to join the money grab that superhero movies have become, M. Night Shyamalan returns to his previous outing...to close it out? Oh no. He's out to start his own superhero universe, his own narrative (Stan Lee did it, so shut up). But first we get to see, to understand, that such...differentness, in the face of what we understand human capabilities to be, is indeed possible. James McAvoy returns with his jaw-dropping turn as a soul with multiple personalities. And I'm already waiting for whatever may come next.

I was reluctant to see Glass given the poor reviews, but I was curious as I had seen Unbreakable and Split and wanted to witness the conclusion. I was sitting in the theater waiting to be let down, and honestly, I really enjoyed it. Granted, the portrayal of mental illness in the film is problematic -- despite McAvoy's charismatic and impressive performance -- but the way the film flips the superhero genre on its head, dissects it, questions it, and keeps us guessing at each turn was extremely engaging. Not to mention it is gorgeously filmed. I found the film to be more interesting, thought-provoking, and better executed than most Marvel films I've seen over the past several years. I think the critics really got it wrong with this one, and I believe that it will age well as a film.

James McAvoy is just as amazing as in Split, but even if there is a lot to commend here in terms of narrative, you don't need that much to realize that this apparently smooth surface has cracks, holes and a bunch of Shyamalan twists that pile up in a desperate attempt to surprise us.