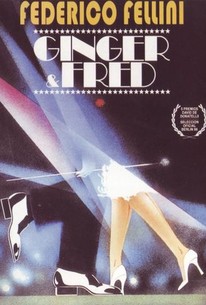 Director Federico Fellini gently lampoons the world of small-time show business in Ginger and Fred. Giulietta Masina and Marcello Mastroianni star as Amelia Bonetti and Pippo Botticella, a onetime celebrity song-and-dance team. Having risen to fame with a dancing act where they recreated the acts of Ginger Rogers and Fred Astaire (hoping to become the Fred and Ginger of Italy), Amelia and Pippo parted company to pursue their separate lives. Neither one was particularly successful in other fields of endeavor, so when after many years Amelia is offered a guest-star gig on a TV variety show, she jumps at the chance. She also seeks out her former partner, Pippo, who may have looked like Astaire in his younger days, but now....The overall good cheer of the film was dampened when the real Ginger Rogers sued the distributors of Ginger and Fred for "defamation of character."

Cosima Chiusoli
as Fiance of the Unfrocked Priest

Sergio Ciulli
as Son of the Clairvoyant

Pippo Negri
as Inventor of the Underpants

Patty Vailati
as Patty the Secretary

When, as happens on several occasions, Amelia and Pippo become an integral part of the impressionistic film that surrounds them, instead of just being witnesses to it, Ginger and Fred ranks with the best work Mr. Fellini has ever done.

The film isn't a particularly pleasurable experience (the satire of television is broad and wayward, and the attempts to wring pathos from Ginger and Fred's geriatric infirmities fall far short of the mark), but it does have a cranky, old-man's integrity.

Ginger e Fred is simultaneously an entertaining movie and a spectacle that produces an infinite sadness because of its pessimism and disillusionment. [Full Review in Spanish]

The scenes in and around the television studio, as the two forlorn old troupers come to terms with the punkish fauna of the 1980s, are -- for this director -- strangely verveless and unfocused.

It's one of Fellini's more accessible and warmer films.

Marks the first pairing of Fellini veterans Marcello Mastroianni and Giulietta Masina and, from their instant chemistry, you'd think they'd been together for years.

A warm and very human story about two people who share a little bit of love, interwoven with director Fellini's diatribe against the inanity of the modern television age.

Boasts an affecting performance by Giulietta Masina as one member of a dance team.

What seems at first like a harmless condemnation of television as an insane, ridiculous circus (and as such it comes off as a silly, dated and mostly unfunny film) soon turns out to be a truly melancholy and touching experience, with Masina and Mastroianni shining together.

Giulietta Masina and Marcello Mastroianni play Rogers and Astaire imitators who are professionally reunited after being apart for some 35 years. Masina and Mastroianni, themselves in their golden years here, are finely and most appropriately cast as figures from a nostalgic long ago.

Fellini definitely is no fan of the television generation that has displaced true entertainers like Ginger and Fred, and as Masina says in the end, "We will never dance again." In fact, both actors were very near the end of their careers and their lives. I'll label this one "bittersweet" as well.