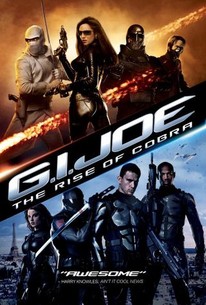 Critics Consensus: While fans of the Hasbro toy franchise may revel in a bit of nostalgia, G.I. Joe: The Rise of Cobra is largely a cartoonish, over-the-top action fest propelled by silly writing, inconsistent visual effects, and merely passable performances.

Critics Consensus: While fans of the Hasbro toy franchise may revel in a bit of nostalgia, G.I. Joe: The Rise of Cobra is largely a cartoonish, over-the-top action fest propelled by silly writing, inconsistent visual effects, and merely passable performances.

Critic Consensus: While fans of the Hasbro toy franchise may revel in a bit of nostalgia, G.I. Joe: The Rise of Cobra is largely a cartoonish, over-the-top action fest propelled by silly writing, inconsistent visual effects, and merely passable performances.

Joseph Gordon-Levitt
as The Doctor/Rex

Sienna Miller
as The Baroness/Ana

Jonathan Pryce
as US President

News & Interviews for G.I. Joe: The Rise of Cobra

View All G.I. Joe: The Rise of Cobra News

Critic Reviews for G.I. Joe: The Rise of Cobra

Loud, shiny, and critic-proof, this franchise launcher is basically Transformers minus the humanity.

[Director] Sommers did the first two chaotic Mummy remakes; those play like Tender Mercies compared to this one.

After a first hour that plays like a bad TV show, Sommers hits his groove with an over-the-top Paris chase sequence that, in turn, leads to an underwater finale that's absurdly overproduced, momentarily diverting, and then instantly forgettable.

Sometimes, a film defies conventional narrative and artistic standards so utterly that it seems unfair to judge it by them.... Consider this a tone poem in 40 scraps of dialogue.

It's just stupid and inept, which are not uncommon traits at the tail end of the summer movie season.

This pricey, juiceless pulp could never have been killed by critics, simply because it was already dead.

You'd think it would be impossible not to extract some fun from a tale climaxing with a nuclear attack on the Eiffel Tower. But the filmmakers found a way.

If I'm to have American imperial propaganda, I couldn't ask for it to be any more shoddily made or any more unconvincing than this.

Tatum and Miller are dreadfully bad. Wayans feels like he came in from the set of another movie and Dennis Quaid, as the G.I. Joe commander, looks about as disinterested with the whole affair as I was by the time the film ended.

Moves at a brisk enough pace to keep its rampant stupidity merely annoying rather than actively offensive.

G.I. Joe lacks structure, believability, decent characters, competent actors and the helmsman has clearly abandoned ship. Save yourself a headache and don't bother with this one.

Audience Reviews for G.I. Joe: The Rise of Cobra

If you're jumping into this movie to be emotionally invested into the characters and plot, don't watch this. Now I am one that hates "Transformers 2" with a passion because it didn't exactly understand what direction it wanted to go. "G.I. Joe: Rise of Cobra" is just as mindless, but has some life in it. The character's dialogue isn't only there to drive the action to a different locale. Some action scenes are spectacular to see, except for the last one. If you wanna see a scene just like the ending, watch Star Wars... you'll get what I mean. I recommend watching it though. It's a fun time.

Now growing up, I was never a huge G.I. Joe cartoon fan. I had all the toys, but was never too big on the cartoon. Having watched this movie, I really hope the cartoon was never this bad. This movie is good to look at, but everything else about it really isn't that great. The story is weak, the acting is bad, and the use of Cobra Commander is pretty lame. Channing Tatum stars as Duke, the new head of the G.I. Joe group, and they battle the Cobra group as they try to use a new technology to take over the world. Tatum is probably the best thing about the movie, other than Snake Eyes who is pretty awesome. Marlon Wayans and Dennis Quaid both seem out of place, and Joseph Gordon-Levitt is so underused it's ridiculous. Not sure if true G.I. Joe would really be fans of this(I know a couple that hated it), but I'm sure kids new to the franchise will like it. I'd say skip it altogether and go straight for the sequel or just about any other action movie.

Okay I watched it . . I cant help it but I liked it. I know its not PURE the comics and thank god not pure the movies. But omg i had fun watching this movie from start to finish. Pure action from start to finish. Eye candy is all this was as my brain didnt even need to engage for it. No thought needed. Much fun included. Snake Eyes vs Storm Shadow in 3 fights . . I mean every GI Joe fanboy in the world has been waiting to see that on a big screen and here it is finally. I enjoyed this way more than I should have.