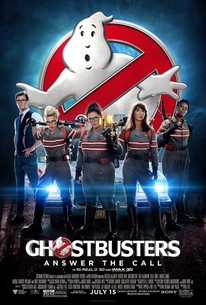 Critics Consensus: Ghostbusters does an impressive job of standing on its own as a freewheeling, marvelously cast supernatural comedy -- even if it can't help but pale somewhat in comparison with the classic original.

Critics Consensus: Ghostbusters does an impressive job of standing on its own as a freewheeling, marvelously cast supernatural comedy -- even if it can't help but pale somewhat in comparison with the classic original.

Critic Consensus: Ghostbusters does an impressive job of standing on its own as a freewheeling, marvelously cast supernatural comedy -- even if it can't help but pale somewhat in comparison with the classic original.

Ghostbusters makes its long-awaited return, rebooted with a cast of hilarious new characters. Thirty years after the beloved original franchise took the world by storm, director Paul Feig brings his fresh take to the supernatural comedy, joined by some of the funniest actors working today--Melissa McCarthy, Kristen Wiig, Kate McKinnon, Leslie Jones, and Chris Hemsworth. This summer, they're here to save the world!

Jaime Pacheco
as Fernando the Janitor

Davey Jones
as Ely The Drummer

Jeanine Ramirez
as Reporter Outside Theater

Al Roker
as As Himself

The fact that the '84 version became a phenom is as strange, really, as the 2016 version becoming a war between idiot men and all kinds of women.

It aims to be a good family film for the summer movie season, and it fits right in with the buttery popcorn I ate while watching it.

It's funny, and nuanced in its funniness: hehs to haaaaaaas to lols.

So, how do the Ghostbusters of today shape up against the boys of yesteryear? Pretty well ...

The new Ghostbusters is not bad at all and it would make a fun outing for a 12-year-old.

It is daringly progressive, and it is a landmark in mainstream entertainment. It's just a shame that it isn't a bit funnier.

For everything that doesn't work, there's so much more that does. These Ghostbusters are solid, and this film effectively riffs on the original and creates its own thing.

2016's Ghostbusters comes as a sip of water in a historic drought. Feig has pulled off the impossible by successfully reworking an unlikely masterpiece, and everyone involved deserves major kudos.

Worst of all, the movie just isn't funny.

We found them all more than capable of taking on the action as well as the comedy. It just could have been put together and paced better, but it's still fun, especially if you see it with a big audience.

The reboot to one of the greatest comedies of the 1980s does not fail because it has an all female main cast. It doesn't deliver the punches and the script has quite a few weaknesses. Wiig is great, Hemsworth pretty funny and McKinnon wonderfully odd, but McCarthy just doesn't have more to offer than the "fat lady getting thrown around a lot" trope. There are short appearances by the original cast and quite a few references to the old film without picking up its chronology, another mistake. The result is still fairly entertaining but actually could have worked despite of the nay-sayers, just with a better script and maybe a different talent or two.

Once again the remake train derails into another franchise with Ghostbusters, the 2016 comedy that seems to be made by people who have never seen the original film. The funny thing is that I now am filled with regret after seeing this overtly controversial film of this summer. Melissa McCarthy, Kristen Wiig, Kate McKinnon, and Leslie Jones star as the title characters in this film about the paranormal invading New York City and the recently unemployed small business owners that are here to fight this new nuisance. A bell boy named Rowan (Neil Casey) is expanding ghost activity for some reason, coming to a climax with Times Square full of scares. (Times Scare? Slime Square?) The script is immature at best and bottom feeding at worst. A nice middle finger scene here, a crotch shot there, basic 13 year old humor like that which plays well to kids and the soft headed. The story is like falling from a tree with the plot hitting one branch, then another, then another, and never really landing anywhere to settle except the eventual land fill that this film feels destined for. I can't really say that the acting is bad. You're only as good as your script and we've already established the mess that road map is. The real issue with the main core of the cast is that there is little chemistry between the quartet. This is probably the biggest fault with Ghostbusters '16 especially compared to the chemistry that is exuded in the original film. Even the sequel felt more on point than this film and it shows. This is reason this film didn't click with viewers, too. I will admit that I was very pessimistic when it came to discussing this film and it wasn't because of the swapping of the sexes, though that felt like it was marketed as a gimmick. In all honesty, the film didn't look good from trailers and research that I did pre-release. Even if it didn't have the no ghost insignia stamped on its marketing this film would have been mediocre. This one had to stand up to one of the most beloved films of the last 30+ years. It feels rushed and thrown together into something for the mass quantities to consume instead of that special thing that was the original film. I'm not going to blame the cast because it feels like they actually believed in what they were doing- an honest retelling of a story that they grew up with, just like you and me. No, this is a failure on director Paul Feig's part. He delivers a soulless film that is just empty calories to be purged and forgotten in a day or two. An albatross on a decent career.

Don't even listen to what the sexist detractors are pouting so much about, this excellent, hilarious reboot is even better than the original movie, with great actresses playing intelligent women who can kick more ass than a lot of men - and the special effects are sensational.