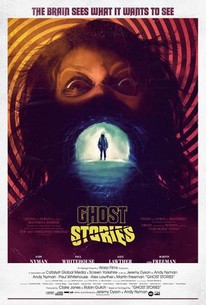 Experience three spine-tingling tales of terror to haunt your dreams. A debunker of all thing paranormal, Professor Phillip Goodman (Andy Nyman) has devoted his life to exposing phony psychics and fraudulent supernatural shenanigans on his own television show. His skepticism is put to the test, however, when he receives a file of three chilling, inexplicable cases: a night watchman (Paul Whitehouse) haunted by disturbing visions as he patrols an abandoned asylum; an edgy young man (Black Mirror's Alex Lawther) involved in a hellish car accident deep in the woods; and a wealthy former banker (Sherlock's Martin Freeman) visited by the poltergeist spirit of his unborn child. Even scarier: each of these macabre stories seems to have sinister connection to Professor Goodman's own life. WIll they make a believer of him yet?

Derren Brown
as Betty
View All

Super Troopers 2 Is More of the Same, but in Canada
The 16 Scariest Horror Anthology Segments

It's a letdown to find that there's nothing at the bottom of a box of tricks which in themselves are not as clever as they could have been.

Ghost Stories has more genuine scares than most horror movies, so it almost seems a bit unfair when it's funny too.

This film nails its black humor and finds a bizarre but satisfying conclusion to manage all the loose ends.

The element that's too often missing from horror is one that Dyson and Nyman relish: fun.

The filmmakers trust the audience, and benefit from a trio of excellent performances by the subjects of each story.

The stories within the main story are interesting but not all that scary unfortunately as they rely a lot on jump scares for their fear factor and these will be hit or miss depending on each viewer.

[O]verall, this is a solid, creepy fright flick.

Packing a whole bunch of horror into its brisk run-time, Ghost Stories is a hugely enjoyable film that's as entertaining as it is terrifying.

[D]amn if this film isn't gangbusters at conjuring up genuine, honest scares, and at giving each of us a lot to think about while the end credits roll.

It's a tad too jump-scary to my taste, and none of the stories are mindblowing, but it is cleverly made and the film is obviously filled to the brim with love for the genre.

As delightfully spooky as the anthology stories are, the framing story turns out to be the most chilling -- and the most affecting -- of the lot.

Three ghost stories in a frame narrative that starts out slowly and what seems to be unnecessarily complicated. The devil is in the details, though and ultimately there is a pay-off, maybe even warranting another viewing or two. As for the ghost stories, they are wonderfully unpleasant and have quite a few jump scares. Overall, and without entering spoiler territory, I appreciated what the movie attempted and was pretty entertained, but somehow it could have achieved even more in every aspect.

What you've got here are three relatively intriguing horror concepts that end just as they are getting interesting held together by a pretty mediocre central story.