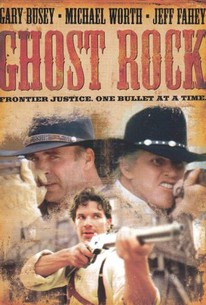 A boy grows to manhood with revenge on his mind in this martial arts-influenced Western. When John Slaughter (Michael Worth) was a boy, his family was killed by a gang of bloodthirsty outlaws. Twenty years on, Slaughter has become a sure hand with a gun and has learned the mysteries of Asian martial arts. Slaughter tracks down one of the men who killed his parents but is unable to exact revenge upon them; however, he does discover that one of the outlaws. Jack Pickett (Gary Busey) is now the mayor of the town of Ghost Rock and is using his political power to rob his constituents for all their worth. Determined to seek a greater justice than mere personal revenge, Slaughter joins forces with a small band of do-gooders to end Pickett's stranglehold over the town once and for all. Ghost Rock also features supporting performances from Jeff Fahey, Adrienne Barbeau, and James Hong.

Michael Worth
as John Slaughter

Peter Kwong
as Song
View All

There are no critic reviews yet for Ghost Rock. Keep checking Rotten Tomatoes for updates!

There are no featured audience reviews yet. Click the link below to see what others say about Ghost Rock!