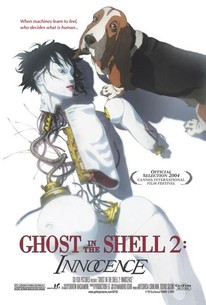 Critics Consensus: The animation is lovely, but the plot is complex to the point of inscrutability, leaving Ghost in the Shell 2: Innocence both original and numbing.

Critics Consensus: The animation is lovely, but the plot is complex to the point of inscrutability, leaving Ghost in the Shell 2: Innocence both original and numbing.

Critic Consensus: The animation is lovely, but the plot is complex to the point of inscrutability, leaving Ghost in the Shell 2: Innocence both original and numbing.

Ghost in the Shell 2 - Innocence Photos

Anime legend Mamoru Oshii wrote and directed this eagerly awaited sequel to his groundbreaking sci-fi drama Ghost in the Shell, which follows the continued adventures of futuristic crime fighters Batou (voice of Akio Otsuka) and Togusa (voice of Kouichi Yamadera). It's the year 2032, and Batou and Togusa have been assigned by the anti-terrorist force Sector 9 to track down several "gynoids" -- androids designed to resemble human females and programmed for pleasure -- who have gone on a murder spree. With the help of an android-technology expert named Kim (voice of Naoto Takenaka), Batou and Togusa find themselves following the trail of Locus Solus, an outlaw organization that may be responsible for turning the gynoids into murderers. As he digs deeper into the investigation, Batou finds himself thinking back to his times with former colleague Major (voice of Atsuko Tanaka) and pondering the notion of love and attachment in an increasingly unnatural world. Ghost in the Shell: Innocence was screened in competition at the 2004 Cannes Film Festival.

News & Interviews for Ghost in the Shell 2 - Innocence

View All Ghost in the Shell 2 - Innocence News

Critic Reviews for Ghost in the Shell 2 - Innocence

Mamoru Oshii's 2004 follow-up to his 1995 anime noir is that rare sequel that surpasses the original.

The elegance, attention to detail, the invention and expertise all ensure that the movie's never less than visually breathtaking.

If you can get past the weighty aphorisms that pass for dialogue, the film has an obscure beauty and rich, melancholy tone.

Muddled up with philosophising about the relationship between mind and the material world.

Occasional passages of shell-cracking egghead overload aside, there's no getting past Innocence's astounding visual power.

The effect of so much pretension and so many lovely images eventually becomes soporific.

This long-overdue follow-up goes the way of most sequels, delivering a visually impressive but far more simplistic -- and thus unsatisfying -- story.

With its themes of human arrogance, wastefulness, creativity, and the definitions and limits of life and the mind, Innocence is pretty heavy. It's also visually stunning.

Much like Akira in the 1980s, this is the film that sets the standard by which all others of its kind are judged - and usually found wanting.

the mind-blowing story and its reality-bending aesthetic form a sublime continuum, where the medium becomes part of the message...this is animation at its most acute and enthralling.

Gone is much of the bombast of the original...

Too talky and philosophical for kids, and dabbling in lavish imagery that lacks enough narrative coherence to hook adults, this is an animated feature that, well, needed to get a little more animated.

Audience Reviews for Ghost in the Shell 2 - Innocence

I used to think the first film was incredibly complex and therefore, very inaccessible. However, the 2nd film is even more convoluted and theory heavy than the first to the point where you can't help but feel it doesn't steer you in a direction that ultimately serves the story's overlying plot. And not the look like a brainless twat, but it really needed more action to balance out with the dialogue heavy philosophical referencing. Nevertheless, a worthy sequel to the original GITS; just lacks the balance in execution that the first maintained.

The third viewing of this one was a little disappointing, but maybe that's because it seems as if they wanted to say more than they could fit into the movie. It doesn't have the philosophical and contemplative quality the first part has. And although it mixes 2D and 3D in a satisfying manner, it's also not as visually satisfying as the first one.

An incredible piece of art, from start to finish! The animation and CG renderings are some of the most stunning scenes this viewer has ever seen. The level of detail and the intricacy draw the viewer into the story, which is pretty good, in and of itself. There is some mysticism, and the constant moving from "real" to fantasy could be at times confusing, but patience is rewarded with most of the elements coalescing back into a cohesive whole upon further exposition. The subtitles could be somewhat distracting as they seemed designed for close captioning, describing clearly audible sounds and using brackets to identify the speaker. The magnificent soundscape formed an integral part of the overall experience and matched the visuals in intensity and in establishing the mood of each scene as it unfolded. The entire experience was quite exhilarating. This one bears multiple viewings and, for that, it gets 5* from this reviewer, who has not been a big fan of anime or manga heretofore.

Although this film is called "Ghost in the Shell 2" it isn't really a direct sequel. It is more or less a stand alone movie, which means that you can watch this without having seen the first. The only thing that the first movie may help you with is the character recognition and the setting of the movie.

With that said, this movie has some of the greatest visuals seen in any animation. It is even better than the "Stand Alone Complex" series which was done after this film.

Although the graphics were of "Ghost in the Shell" quality, this film did feel a little out of place from the rest of the series (The first movie and the latter TV series and movie). The setting seemed a little more sci-fi/futuristic than normal and the fact that the major is almost non-existent makes the cast feel empty. The typical online communication between characters wasn't used that often as well.

As mentioned earlier Major Kusanagi only has a small part in this film. This makes Batou and Togusa the main characters, which will make fans of these characters happy. There isn't a whole lot of action but there are a few good sequences throughout. This is another one of those stories where you need to really pay attention otherwise you will get lost.

All-in-all there is some great visuals and an interesting story and fans of the series will definitely want to see this.

Ghost in the Shell 2 - Innocence Quotes