The Ghost and the Darkness1996 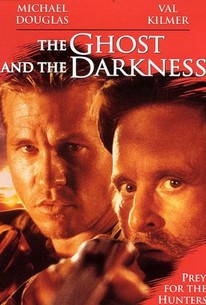 Critics Consensus: The Ghost and the Darkness hits its target as a suspenseful adventure, but it falls into a trap of its own making whenever it reaches for supernatural profundity.

Critics Consensus: The Ghost and the Darkness hits its target as a suspenseful adventure, but it falls into a trap of its own making whenever it reaches for supernatural profundity.

Critic Consensus: The Ghost and the Darkness hits its target as a suspenseful adventure, but it falls into a trap of its own making whenever it reaches for supernatural profundity.

The Ghost and the Darkness Photos

In this old-fashioned jungle adventure, a British engineer, Colonel John Patterson is sent to the Tsavo River deep in the East African wilds to construct a vast railroad bridge as part of the Pan Africa railway. But instead of focusing all his attention on getting his crew, comprised of a tempestuous crowd of natives, Moslems and Hindus, to construct the bridge, he ends up fighting a nearly mystical pair of man-slaughtering rogue lions with the help of an Africanized great white hunter. The film contains considerable violence as the lions turn out to be voracious and ruthless killers. The plot is allegedly based upon a true story.

Satchu Annamalai
as Worker No. 1

Teddy Reddy
as Worker No. 2

Rakeem Kahn
as Worker No. 3

Glen Gabela
as Orderly No. 1

Richard Nwamba
as Orderly No. 2

Critic Reviews for The Ghost and the Darkness

The picture is too lightweight, too posturing and too self-important to go in an introspective direction.

Ranges in quality from adolescent boys' adventure stories to Heart of Darkness.

When the movie sticks to fact, the result is a hypnotic spectacle.

Despite mumbo jumbo about the lions being supernatural demons unleashed by the imperialistic white man, it's nothing more than Jaws with claws.

The camerawork is frenetic and confusing, and the big confrontations are as likely to provoke unintentional laughter as edge-of-the-seat excitement.

A scenery-chewing Michael Douglas is the highlight of this passable landlocked variation of Jaws.

Effectively wipes out the lion's cuddly image from The Lion King and reinstates its rep as the fearsome king of the jungle.

Rich Cline
Shadows on the Wall
View All Critic Reviews (47)

Audience Reviews for The Ghost and the Darkness

Based on a true story, this is a suspenseful adventure yarn about the Tsavo Manhunters who terrorized laborers working on a railroad in East Africa in 1896. The Tsavo Manhunters are a pair of vicious lions who kill for sport, and seem unafraid of man and fire, and have an almost supernatural ability to sense danger and traps. The native workers name them the Ghost and The Darkness, due to their attack methods. Col. John Henry Patterson is a railroad engineer/big game hunter tasked with killing the lions and getting the railroad built on time. His efforts to succeed continually fail, so a wily American big game hunter named Charles Remington is brought in to help him out. Screenwriter William Goldman was originally wanting to meld Lawrence of Arabia with Jaws. The basic idea of that is onscreen, but unfortunately it isn't taking to the level it could have been. Maybe had a stronger director been attached... The film strays some from the original story, mostly by adding the fictional character of Remington, but still retains the gist and spirit of the actual events. The film is actually rather light on gore, and some of the action scenes are a bit too choppy and frenetic with how they're edited, but somehow the film is still rather suspenseful and gripping. Plus, it's got some good cinematography, and the deeper themes of imperialism and "white man as champion" are touched upon and dealt with somewhat, so that's cool. The music is also appropriately subversive at times, and tense when it needs to be. Val Kilmer is good as Patterson, and I like how they don't treat him as a total wimpy character. Michael Douglas is wildly scenery chewing as Remington, but perhaps a bit too over-the-top and goofy. Still though, his performance is rather fun to watch. A pre-fame Tom Wilkinson is good at the company man who doesn't care about the setbacks, and just wants his damn railroad built, and John Kani is decent as the native sidekick Samuel. All in all, this is a decent enough adventure thriller in the vein of old fashioned adventure serials. It's pretty flawed, and sometimes goofy, but I found myself more pleased with it than not, so give it a go.

I have to say I really enjoy The Ghost and the Darkness, but not because it's a fantastic film. It's actually a bad film with good elements to it, but there are things about it that fascinate me. First of all, it's directed by Stephen Hopkins, whose film output has been hit and miss but mostly miss. This film did make a profit, but then again, I don't think it had all that much competition at the time. Second, Val Kilmer and Michael Douglas are really bad in this. Val Kilmer is his usual stoic self, even when he's trying to be outraged or scared about something. Michael Douglas just sticks out like a sore thumb, and I don't understand how he got top billing when he doesn't enter the story until about halfway through and then disappears before the film's climax. When you read up on it and realize that his character wasn't even a part of the real-life events you begin to understand why he sticks out so much. His acting is also terrible, not to mention his outfit and extensions. Third, even though this is a Jerry Goldsmith score, I find it really annoying, particularly the chanting bits. It's definitely not one of his best works, and there's too much of it in the movie if you ask me. The film is also terribly uneven and feels longer than it actually is. There are some enjoyable bits in it, and it's nice to see Bernard Hill and Tom Wilkinson pop up in small parts (the latter being a pretty nasty character, laughably so), but it's not a great movie. I like it for the crap that surrounds it, and because I'm a fan of Stephen Hopkins who I think is a talented visual director with a gusto for delivering shlock stories.

This African hunting adventure seems to come right out of the era of great Hollywood films with similar themes. It is old-fashioned in the good sense. Two men, their guns and two lions, that terrorize a bridge-building camp in Uganda. That simply premise is delivered well here, with decent acting, enthralling lion attacks and action scenes and great cinematography. When the camera lingers on the sea of dry grass and you expect to spot a lion in there somewhere, the film is particularly strong. Sadly, it wastes its rather interesting minor characters a little too easily. But overall, it's an entertaining and well made film.

This movie is unintentionally hilarious with its cheesy lines and horrible acting. Michael Douglas turns in a hilariously bad performance while Val Kilmer is tolerable. The only thing that makes this movie interesting is that it is true (with Hollywood exaggerations of course).

The Ghost and the Darkness Quotes