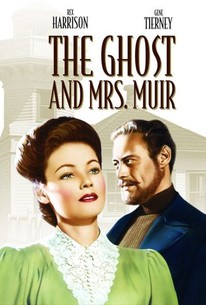 The Ghost and Mrs. Muir Photos

Based on R.A. Dick's novel, this film is a romantic fantasy about a widow who moves into a reportedly haunted cottage on the English seaside. Shortly after she arrives, she is indeed haunted by the ghost of a sea captain. Though their relationship is antagonistic at first, the two become friends.

Vanessa Brown
as Anna Muir as an Adult

Natalie Wood
as Anna Muir as a Child

Stuart Holmes
as Man on Train

Houseley Stevenson Sr.
as Passerby at Fairley Residence
View All

Critic Reviews for The Ghost and Mrs. Muir

The film's whimsy is a bit heavy-handed and it is short on wit, style and ingenuity. Yet most of it is pleasant enough fun, and pretty to watch.

The direction is smooth and the script has a relaxed good taste as it deals with piquant situations. Even the bit parts are played with distinction.

'The Ghost and Mrs. Muir' easily could have stumbled into melodrama or dramedy. It works as well as it does because of understatement, and it's still a charming and captivating film more than 60 years later.

[Tierney's] her somewhat stiff presence seems appropriate to the formality of the period while her astonishing beauty is only enhanced by the many layers of clothing women were expected to wear at the time.

It didn't move me as much as I think it should have.

[A] charming tale of two lost and lonely souls, one of which just happens to be dead, who take some grudging comfort in each other's presence.

Most notable for its effortless shifts in tone, starting out as a charming comedy before segueing into a melodrama ... and finally erupting as a deeply affecting tragedy capped by a redemptive ending.

Audience Reviews for The Ghost and Mrs. Muir

With a moving score by Bernard Herrmann this atmospheric piece of cinema becomes one of the great screen romances, ocean waves poetically crashing against the shore and all. A widow and her daughter move into a lonely seaside cottage reportedly haunted by the ghost of an old sea captain. But is it? Tierney and Harrison are most sympathetic here.

An inviting and star crossed film about a love that dare not speak its name, and some semblance of a ghost story. There isn't anything too supernatural or strange about this film, but it is about the loss of what could have been, an inviting subject since one of the paramours is dead. Set at the turn of the twentieth century, it stands as a period piece about an always lonely widower with a daughter and servant who move to a secluded cottage in England. Inhabitating the cottage already is the wrongfully slandered sea Captain Gregg who haunts the house after not accepting his own demise. The film warrants sincere love from watchers as we see Mrs. Muir battle her conscience, heartbreak, and tries to be strong against her in-laws and the decisions she must make though they keep her isolated from the outside world. Though truly a ghost story about the captain, it doesn't ultimately center on the dear departed Gregg. There are some interesting scenes where special effects are used to open and close windows, doors, and all manner of lights switching on and off. This leads to a good bit of humor, which is where Rex Harrison shines through. His exceptional humor and briny performance come off as the learned man of the house, while also being brash and roguish. Though their romance comes off as stilted and strange in truth, the actual story and breadth of time it takes for the ending to come about was heartbreaking to watch, as Mrs. Muir is left to her own ends and finds little truth in her life or in the captain's death. Gene Tierney is also a beautiful addition to the cast. She is so prudish and sweet tempered, yet she doesn't wait to be pushed around by her family, or for that matter a ghost. Though she is certainly strong, there is little to be done about her own happiness and life, as the only person for her is actually dead. Though the last twenty minutes peter along slowly, it was a sufficient buildup to show the complexities of Mrs. Muir's situation and her choice in her own happiness. I absolutely loved the adorable give and take between the two leads, the moments of humor demonstrated mostly from Rex Harrison, and the performances, even from the little girl. It was a beautiful film, if not a tad campy and the characters somewhat petulant at times.

Strange and even a bit silly at first glance, then it turns enchanting, dreamy. hauntingly beautiful. A misty night, with the sea side and the waves clashing, in front of Gene Tierny's angel face and backed by Bernard Herrmann's gorgeous music score, and I could die happy.

A predictable but heartfelt love story. You can see the ending coming a mile away, but it doesn't make the story any less enthralling.

The Ghost and Mrs. Muir Quotes