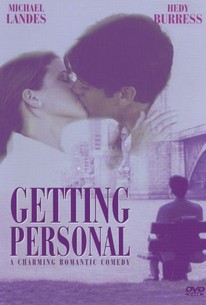 Ron Burrus directed this low-budget romantic comedy, set in Boston. The lead role of Bostonian Christopher DiMarco is portrayed by Michael Landes (Jimmy Olson on Lois & Clark). After a blackout, the tux-clad Chris regains consciousness on the porch of a beachfront summer cottage, where he encounters attractive zoologist Melissa (Hedy Burress) and her annoying roomie Liz (Dina Spybey). Chris and Melissa become a twosome, but bad advice from his divorced pal Peter (Lenny Clarke) and intrusions by Liz lead Chris on a downward spiral. After another blackout, he seeks therapy from Dr. Maddie (Lane Smith), and long-lost, buried secrets are soon excavated. Shown at the 1998 Seattle Film Festival.

Critic Reviews for Getting Personal

There are no critic reviews yet for Getting Personal. Keep checking Rotten Tomatoes for updates!

There are no featured reviews for Getting Personal at this time.