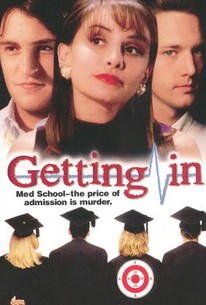 An attempted black comedy, Getting In endeavors to satirize the cut-throat competition surrounding the medical school admissions process -- a struggle that in this case literally turns deadly. Gabriel Higgs is an aspiring medical student, not out of a great dedication to his craft but due to pressure by his parents, who expect him to follow the long-standing family tradition of attending Johns Hopkins and embarking upon a prominent medical career. However, a poor showing in the admissions test and several other mishaps conspire to place Gabriel on the school's waiting list. Desperate to gain entrance to the school before being disinherited, Gabriel takes to bribing his fellow waiting-list candidates to ensure his admission. But when the students at the top of the waiting list start turning up dead in rather nasty ways, Gabriel finds himself in real trouble. He must discover who is committing these crimes before he is blamed -- or becomes the next victim himself. Easily forgettable, the film is mainly notable for featuring early performances by future television stars Matthew Perry and Calista Flockhart, and for being the directorial debut of Doug Liman, who would receive critical acclaim for his second film, Swingers.

Critic Reviews for Getting In

There are no critic reviews yet for Getting In. Keep checking Rotten Tomatoes for updates!

There are no featured reviews for Getting In at this time.