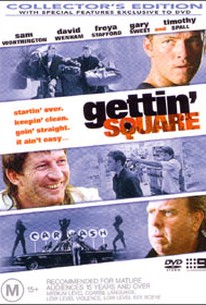 Australian filmmaker Jonathan Teplitzky directs the crime comedy Gettin' Square. Barry Wirth (Sam Worthington) is an ex-con who just wants to stay on the right side of the law. David Wenham plays Johnny "Spit" Spitieri, a zany, lovable drug addict who knew Barry in prison. They both get paroled by officer Annie Flynn (Freya Stafford) and plan to play it straight this time. They get jobs at the Texas Rose, a restaurant owned by Darren Barrington (Timothy Spall), another ex-con trying to go straight. Barry, Spit, and Darren team up against the local gang boss Chicka Martin (Gary Sweet).Things get messed up when Darren's shifty accountant Warren Halliwell (Steven Tandy) finds himself the interest of the Criminal Investigation Commission. Gettin' Square was the opening film at the 2003 Brisbane Film Festival. ~ Andrea LeVasseur, Rovi

There are no critic reviews yet for Gettin' Square. Keep checking Rotten Tomatoes for updates!

Determined to stay on the straight and narrow, parolee Barry (Sam Worthington) gets out of jail on Parole to take care of his baby bro, he takes on a job at a restaurant called the Texas Rose. His former jail mate, ?Spit? (David Wenham) gets involved dealing for local gangster Chicka (Gary Sweet).Barry?s employer ?Darren ?Dubba? Barrington (Timothy Spall) who owns the Texas Rose establishment is also a reformed ex-con, and together, the three conspire to bring down the crime boss. This much-nominated Australian comedy also stars Freya Stafford and Steven Tandy Australian movie & yes that means Worthy man is in it!! IT starts out w/ his character Barry Wirth (of course it had to be a Barry LMAO! Karma!) in Jail. He was detained for a robbery along with a few others of his group) . Oh Yeah & for the Harry Potter fans. Lmao Peter Pettigrew (Timothy Spall plays ?Dubba? the owner of the Texas Rose in it. I don?t want to ruin anything but if you read the plot. ?Chicka? isn?t the only one, the guys have to worry about. Det, DeViers (I think that was his name) keeps coming along & harassing ?Watsy? (Sam Worthington?s Barry?s Nickname) The Det.?s roll in the movie however is not mentioned in the plot?Remember I saw it for Worthy so I didn?t really care if it was good or not but if I have to give it a grade I?d say a C