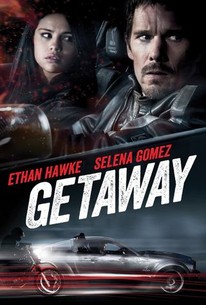 Critics Consensus: Monotonously fast-paced to the point of exhaustion, Getaway offers a reminder of the dangers in attempting to speed past coherent editing, character development, sensible dialogue, and an interesting plot.

Critics Consensus: Monotonously fast-paced to the point of exhaustion, Getaway offers a reminder of the dangers in attempting to speed past coherent editing, character development, sensible dialogue, and an interesting plot.

Critic Consensus: Monotonously fast-paced to the point of exhaustion, Getaway offers a reminder of the dangers in attempting to speed past coherent editing, character development, sensible dialogue, and an interesting plot.

Brent Magna (Ethan Hawke) is a burned out race car driver who is thrust into a do-or-die mission behind the wheel when his wife is kidnapped. With Brent's only ally being a young hacker (Selena Gomez), his one hope of saving his wife is to follow the orders of the mysterious voice (Jon Voight) who's watching his every move through cameras mounted on the car Brent's driving. (c) WB

Selena Gomez
as The Kid

Jon Voight
as The Voice

Paul Freeman
as The Man

50 Worst Summer Movies of All Time
Parental Guidance: Frozen, Plus Red 2, Jobs and Getaway
Critics Consensus: One Direction: This Is Us is Lightweight But Entertaining

It's all you can do not to laugh. Oh, go ahead. But be forewarned that there are many miles to go before we get to the end and it will feel like an eternity before any of it makes sense.

If movies need us to suspend disbelief, you have to supply your own clothes hangers for Getaway.

One of the worst films of the year, by a country mile.

You watch the resultant, wholly bloodless carnage with brain in neutral and eyes glazing over, as you would a re-run of Police, Camera, Action! at two in the morning.

This latter-day B movie can be rather fun in its preposterousness and bargain-basement style.

Getaway is pretty much a 90-minute car chase. That's it.

I feel such sadness and pity for the stunt drivers who risked their lives as part of the making of... Getaway.

Like a shark, the film struggles to stay alive when motionless

I know this is a film where you have to suspend disbelief, but it's hard to take that leap of faith when everyone involved seems to not care as well.

A little of a haunted man trying to save his wife, wondering if the methods justifies the means, with a snarky teen complaining in his ear is just too much of a strange thing.

...the wheeling and dealing of Getaway is all too familiar in its wasted gas-guzzle gumption of throwaway excitement and stimulation... it cannot change the fact that it has hit a creative speed bump...and in a worst way possible.

For all of its vices, I can't help but think that we've brought Getaway on ourselves. It's not the car chase film we need right now, but it's probably the car chase movie we deserve. And if the finale is any indication, a sequel could be ready to go.

So despite this films title the plot isn't actually about a getaway no Sir, its more along the lines of someone having to complete missions in a time limit or his wife dies. Yep that's the whole plot in a nutshell, Ethan Hawke is trapped within a souped-up GT500 Super Snake Mustang and must do whatever the mystery voice on his phone says or his kidnapped wife gets it. There are two problems with this concept...1. its completely ridiculous and 2. Hawke picks up Selena Gomez along the way. First off the mystery voice and lips we see are obviously Jon Voight, there is no mystery at all, its Jon Voight, moving on. The next massively glaring issue is the car, the actual idea behind this film isn't too bad despite playing out like a [i]GTA[/i] videogame. The silly thing is the location for this action is Sofia, Bulgaria (for some reason) and generally in that country you probably won't see highly souped-up Mustangs. So the fact that Hawk is tearing around the city doing all these crazy things is completely idiotic because firstly the car stands out like a sore thumb so there is no way in hell you could disappear or be remotely inconspicuous...thusly you'd be spotted a mile away by everybody, and secondly the police would literately lock down the city. The fact Hawke is able to quietly drive around in his burbling Mustang with generally no attention is absurd. That's the main issue which lets down the entire plot, it just doesn't work, but there are many others. I'm still not really sure why Voight goes to all that trouble with Hawke behind the wheel, surely he could do what he intended stealthily? the fact they cause so much mayhem just means there are tonnes of mobile police units around. On another point I see absolutely no reason why Gomez's character was required. Voight's mystery character sets her up with Hawke but there is no real need for her, she is literately just there to gain a wider audience. The other thing that really made me giggle to myself was the poorly forced notion that Gomez's character is some kind of petrol head and the Mustang is actually hers...which she modded herself! as if!!. She reels off all this car jargon in a lame attempt to try and make you believe she's a cool cat and she may be of some use to Hawke's character in the film. Of course she is a nerdy techno kid so she does come in handy hacking into all the digital cams that have been fixed around the car and naturally she grows to like Hawke's character and wants to help him blah blah blah. I'm not saying this film should be anything epic, the film was released under the Dark Castle Entertainment label which is basically a straight to DVD type get up so in affect you get what you pay for. As I said its not all awful though, the idea is sound and its directed well to be honest. Instead of regular filming we see the main two car occupants through the various in-car digi cams which Voight's character uses to watch them. Its nothing that incredible but it adds a nice touch of originality to an otherwise slightly unoriginal idea, it does looks good at times. The other main hook is the car chases and car wrecks you see throughout the film. Think along the lines of 'Ronin' and you're not far off, its not as slick as that film and the fact its all at night means you don't see everything clearly but I can't deny some of it was impressive. Totally daft how these shitty old Bulgarian police cars manage to keep up with this hyper Mustang (or so we're lead to believe, it ain't no rice racer) and its utterly hilarious how this Mustang gets into so many prangs and collisions but suffers hardly any damage!! Its so obvious they wanted the car to remain intact for as long as possible, to remain recognisable, they were probably under instructions by the folk at Mustang. Unfortunately it adds even more to the already high levels of unrealistic nonsense and takes you out of the film completely. At one point Hawke's character slams the car bonnet first into a police car, shunting him off the road, yet the Mustangs headlights still work with no sign of damage! Towards the end we do get some twists and turns which kinda work but leave it feeling a bit convoluted. Again in order to gain a wider audience they have cast a real duo of classic bad guys leading up to Voight...enter Bruce Payne and Paul Freeman. Their roles are so so small so don't get excited, like I said they're there just to add a bit of class but really with such small parts anyone could of played their roles. Them being there doesn't change anything or make the film better. Its a throw away flick which is a shame because it could of been much better if they ironed out some of the silliness. There really is so much stuff that just doesn't add up and we don't really learn who Voight's character is or what is overall game plan is, he's just pinching loads of money via computers in an extremely over complicated way it seems. If you like cars/car chases then this may grab your attention, otherwise it offers nothing really.

*1/2 I really like a good car chase movie. When done right, they can be some of the most exciting action sequences in film. Then you get a movie like "The Getaway" where it is a 90 minute long car chase, and it just doesn't work. It's a big mess actually. Ethan Hawke stars as a driver who has to drive a car around a city doing a lot of crazy stuff that a mysterious voice on the phone(Jon Voight) is telling him to do, since he has kidnapped Hawke's wife. Along the way Hawke picks up Selena Gomez and the 2 try to figure out how to save his wife, and why this is being done to him. This is a bad movie. The directing is horrible. The edit job on this is one of the worst I've ever seen. It goes back and forth from the regular camera to camera set up on the car to make it seem like a found footage type movie. Hawke does good, as he always does, but Voight is completely wasted and Gomez is very miscast. I saw just completely skip this and watch a "fast and furious" movie if you like fast cars. If you want a good thriller involving a car, check out the original "Hitcher" or even "Joy Ride". Otherwise you'll want to get away from "The Getaway"(lol, see how I did that:-p )

Get in. Get out. Getaway. Good decent movie! This is a popcorn movie. Nothing more. I understood that going in. It's not high art. It doesn't revolutionize movie-making, and is not even the high point of the genre. But it's entertaining, and that's all I ask of a movie. Give me some popcorn and a Coke, and dim the lights, let me forget about the world for a couple hours, and I'm happy. Most of the plot was admittedly easy to figure out early on, but the movie still provided plenty of excitement in how it got there. There were some aspects of the story that were dismissed without explaining a lot of detail, but it didn't rely on otherwise smart people doing dumb things to make it all work, and I appreciated that as well. Overall, I enjoyed Getaway, but that may be in part because I went in with low expectations. The movie is what it is and if you know what you're getting into it shouldn't be that much of a letdown. Getaway is the gritty, exciting action thriller from Warner Brothers in which former race car driver Brent Magna is pitted against the clock as he commandeers a custom Shelby Super Snake Mustang, taking it and its unwitting owner on a high-speed adventure at the command of a mysterious villain on a race against time to save the life of his kidnapped wife.