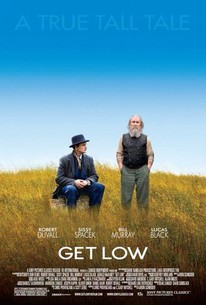 Critics Consensus: Subtle to a fault, this perfectly cast ensemble drama is lifted by typically sharp performances from Robert Duvall and Bill Murray.

Critics Consensus: Subtle to a fault, this perfectly cast ensemble drama is lifted by typically sharp performances from Robert Duvall and Bill Murray.

Critic Consensus: Subtle to a fault, this perfectly cast ensemble drama is lifted by typically sharp performances from Robert Duvall and Bill Murray.

Inspired by the true story of Tennessee recluse Felix "Bush" Breazeale, who planned his funeral while he was still alive, director Aaron Schneider's dramatic period thriller stars Robert Duvall, Bill Murray, Sissy Spacek, and Lucas Black. Few folks have spoken with Felix Bush (Duvall) since he disappeared into the Tennessee woods 40 years ago, and the ones who have don't necessarily have the kindest things to say about him. Gruff, confrontational, and ill-tempered, Felix has been the source of many malicious rumors over the years. Some say he's a cold-hearted killer and his penchant for walking into town with a shotgun, a wild beard, and threadbare clothes doesn't exactly give the impression of a man who seeks to make friends. When Felix walks into Frank Quinn's (Murray) funeral parlor and announces his intentions to throw himself a massive party before he passes away, word quickly spreads through town and anticipation starts to run high. Before long the big day has finally arrived, and Felix surprises everyone by revealing exactly why he shunned society to lead a life of solitude in the deep woods. ~ Jason Buchanan, Rovi

Gracie
as Bush's Mule
View All

News & Interviews for Get Low

View All Get Low News

Critic Reviews for Get Low

Get Low is a handmade kind of film. Its ambitions are modest, but fully attained. I rarely use the words ''go see it'', but I hope a lot of people do.

Sweet and gentle and occasionally makes you crave a catnap.

Aaron Schneider's southern folk tale comes slathered in corn syrup, oozing its way towards a climax that's not so much big reveal as dying whimper.

Get Low is an unexceptional film, but Duvall's presence elevates it beyond all expectation

That the finale ends up being trite is a shame, but the long, gentle jaunt to arrive there is a pleasurable one.

The creaky foreshadowing is a big problem, and the movie runs in place for most of its second half, though Duvall manages to pull it back on track with his climactic soliloquy, which sobers and silences the carnivalesque funeral party.

If you take the Southern kitsch with a grain of salt, Get Low is otherwise a largely amiable, enjoyable film.

While I'm not one to say "wait it out" often, I now implore you to keep you eye out for "Get Low," see it at your earliest convenience, and be patient.

Quiet character study is stellar but won't appeal to kids.

This is a film about a man who doesn't speak to the world for 40 years, and once it comes time, the movie won't let him, or itself, shut up.

Audience Reviews for Get Low

Robert Duvall and Sissy Spacek team up to produce one of the best movies I've seen in a long time. Robert Duvall is Felix Bush who is a hermit who has kept himself locked away in his own cabin away from anybody for forty years. Getting on in life he wants to hold a funeral party before he attends, and anyone who has a story about him is invited. But he has a story to tell. A very moving story with the secrets of the south. I knew 3 minutes into this movie that it was filmed in Georgia. Oh how I miss the South. 5 stars

This is another linear story with unexceptional plot, only acceptable because of a sterling leading man and stellar supporting cast. This is a story of a recluse deep in the woods, who holds a title of infamy amongst the people of the nearby town as a murderer, rogue, and rapscallion. None of the stories concerning him are revealed, so we're under the impression that these people fear little and are accountable for their own biased remarks of his character. This is the first in a long string of flaws the film exemplifies with no aforethought. Yes, the quirky story is worth exploring, especially since it's based off of actual fact, but the way everything is executed varies in effectiveness. For example, the main character of Felix Bush is obviously drawn to the newly arrived Mattie (Spacek), a figure from his distant past. Instead of this being something tender and worth giving a look of honesty and rebuilding, she's simply an old friend who blunders through dramatic stomp offs and tantrums. If it had been better thought out it could have been perfection. Murray, who portrays a slightly corrupt funeral director, is very Ebenezer Scrooge with a hint of empathy for his assistant and Bush himself. I would say Murray is trying to cultivate his indie persona already in place from Lost in Translation and Broken Flowers, but his impish charm is far more reminiscent of Stripes, and his presence is something I've never seen of him: dry. Each seasoned veteran is exceptional as usual, but the story just ruined it for me.

Great little movie. Compelling. Entertaining. What you should expect when a cast of experienced, classy actors get together to play out an interesting story. Robert Duvall excells in this, which isn't surprising.

A small movie with great impact, on me anyway. And a great performance by Robert Duvall.