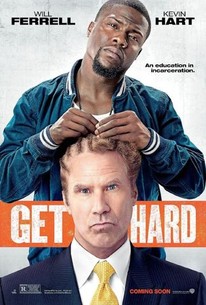 Critics Consensus: A waste of two fine funnymen, Get Hard settles for tired and offensive gags instead of tapping into its premise's boundary-pushing potential.

Critics Consensus: A waste of two fine funnymen, Get Hard settles for tired and offensive gags instead of tapping into its premise's boundary-pushing potential.

Critic Consensus: A waste of two fine funnymen, Get Hard settles for tired and offensive gags instead of tapping into its premise's boundary-pushing potential.

Will Ferrell and Kevin Hart headline this Warner Bros. comedy about a wrongfully convicted investment banker who prepares for prison life with the help of the man who washes his car. Etan Cohen directs, with Ian Roberts and Jay Martel handling screenwriting duties. ~ Jason Buchanan, Rovi

Will Ferrell
as James King

News & Interviews for Get Hard

New on DVD & Blu-Ray: Get Hard, While We’re Young, and More
Critics Consensus: Home Is Colorful but Too Familiar
Will Ferrell’s 10 Best Movies

View All Get Hard News

Critic Reviews for Get Hard

It's all awful enough that you expect the movie to end with a title card that proclaims, "Don't worry, guys - we have gay friends and black friends. We're cool."

A confused and contradictory mess.

Ferrell has stuck to the formulaic farce that made him a star, even as his roles have been shifting from antic instigator to bewildered straight man.

Dumb, juvenile comedy has its place when it's funny. Unfortunately, too often in Get Hard, it's not.

From its juvenile double entendre title to its fascination with prison rape and homophobic humor, "Get Hard" practically announces itself as an offensive, tired and unimaginative comedy in nearly every scene.

The director Etan Cohen neither gets the best out of his two leads nor manages to give his story much of a satirical or political kick.

Get Hard features the type of jokes you'd expect from a title that's an innuendo itself. The outrageous laughs almost make the plot unimportant but ultimately fit the style Ferrell is known for.

Uninspired and unfunny, Get Hard is further evidence that Ferrell needs a career intervention.

Thom Denson
One Room With A View

Instead of lampooning racial difference or satirising white collar crime, it opts for the easiest, most crowd pleasing humour, and hammers the screen with jokes that get old almost as soon as you hear them.

There are some chuckles to be had here, because with such gifted and reliable talent that's pretty much a given. But the vehicle that houses Hart and Ferrell is so scummy and poorly crafted it isn't worth anyone's time.

Ferrell and Hart prove to have really good chemistry... But for every positive moment the two generate, you get three or four moments that don't work.

I was offended by the film's laziness. It confuses being shocking and obnoxious with being edgy. Instead of finding the line and cleverly crossing it, it finds the line and takes a greasy, self-righteous dump on it.

Audience Reviews for Get Hard

Pretty average. I missed the end and I don't feel too upset about it. A few laughs, but pretty juvenile.

Only the stars manage to sell this groanworthy collection of bad and inappropriate humor, and that only barely. Somewhere in the midst of the dreck though are a coupla bits of decent comedy, sustaining your dwindling interest in this predictable mosh of toilet dispensibles.

Another throwaway comedy from Ferrell? yeah pretty much. Despite the fact this guy is mega famous and has made some solid movies, his filmography is top heavy with throwaway garbage, literately littered with trashy flicks. I find it weird that three of his worst movies happen to be about various sporting events, ice skating, tennis and NASCAR racing. So lets be honest here this movie is simply one big stereotype, one big cliche, every angle is nailed well and truly...almost to an offensive level. Put simply, Ferrell plays a rich successful businessman who works for a large company. He has it all including a mansion, flashy automobile, slick suits and a hot fiancee, he is on top of the world. Then as quickly as his lavish lifestyle is presented to us, its all torn down as he is accused of corruption. He now has 30 days until he goes to jail for the next ten years. In desperation he turns to humble car washer Kevin Hart for help, his request? to train him for prison life, to get him hard, tough, butch. At the same time Ferrell's character must also try to figure out how he was busted when he is innocent. I don't wanna sound overly politically correct mainly because I can't stand the modern extremist PC trend, but damn is this entire story just one big insult. I mean lets look at the actual premise, Ferrell's character is a stereotypical rich, smart, white character, Kevin Hart is actually a hard working honest black character. Yet King (Ferrell) goes to Lewis (Hart) for help simply because he is a black man and he automatically assumes he will know about being in prison, criminal life, or automatically assumes he has been to prison. Right there you have a bit of a no no technically, not a great start. From there on Lewis helps King train for prison, this naturally entails every single stereotypical prison cliche in the book. All prison inmates are automatically assumed to be either black or hispanic/latino with all the regular well known cliches that accompany that outlook. You know exactly what I mean, virtually all the characters are big, tattooed, gold teeth, bling, baggy pants around the hips, shades, silly headgear and loads of profanity and street lingo. Of course revolving around prison there will also be lots of homosexual references, gags, innuendos and slapstick. One sequence actually shows King trying his hand at oral sex on a man! he doesn't actually do it of course but we do actually see a penis! full screen! was it fake? looked real to me. But its not just people of colour that are hit, to counter the black and latino gangs there are of course the stereotypical redneck, black leather clad, white biker gangs just so no one feels left out. What's funny is even the presentation of Ferrell's character is a slightly offensive or annoying stereotype. A weedy, wussy, straight-laced, well spoken, college grad type that is unable to interact with lower income people and treats them like slave labour. All the people that clean his huge mansion appear to be Mexicans and all the workers in Ferrell's company are white, not a single person of colour to be seen. The black street gang the duo visit for help later in the movie are the epitome of movie stereotypes (the women with the gang are all dressed and act like sluts etc...). This entire movie is enough to give all the social justice warriors out there a heart attack. The fact that we all know deep down most of this is kinda accurate to reality anyway isn't the point (it really isn't), everything we see is so tired, old, formulaic and unoriginal its just not really funny. The story isn't even particularly relatable or realistic anyway which affects the comedy. The first scenes we see of King revolve around his luxurious lifestyle, so basically its just like watching Will Ferrell in his own real life because we all know these movie stars live in massive abodes, driving supercars with hot partners. Later on in the movie as King's training becomes more intense they actually convert his home into a makeshift prison? Putting bars on windows, electrified barbwire fencing and spotlights around the grounds, creating a cell, using his cleaners as prison wardens etc...I realise its just a dumb comedy going for laughs but would anyone really go to those lengths? it just seems like stretching for a visual gag. Indeed most of the jokes here solely rely on really grasping for laughs with forced visual tomfoolery, or they just bank on the old racist, homophobic, sexist angle to win the day. Admittedly there were a few moments that made me smile, a few bits of dialog that made me chuckle, I can't recall them now but it happened. The second half the film gets a bit better as we discover how and why King got set up, although this doesn't enhance Craig T.Nelson's role in the movie, nor does it explain his decision for being here in the first place. The one thing I did like about the film was the fact its an adult movie with adult things...like some nice moments of tits n ass (sexist remark is recognised, hypocrisy noted). In this day and age I'm actually stunned this type of movie is allowed to go ahead and the fact it actually did well! Yes its good to laugh at ourselves and each other, no harm in that, but these days is risky lets not beat around the bush. Bottom line everyone knows what they're getting into with this, its all quite intentional and they do hit their marks, but that doesn't mean its good.

A comedic duo like Will Ferrell and Kevin Hart would be hard to disappoint, and they don't. But the film's problem is its utter dependance on jokes about either race or rape or homophobia, rather than anything more substantial and filling. A few key scenes, however, are gold.