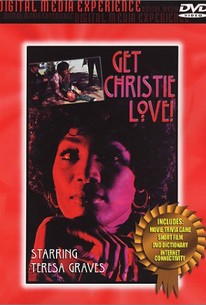 The Dorothy Uhnak novel The Ledger was the basis of Get Christie Love! The title character, played by former Laugh-In regular Teresa Graves, is the first black woman to be hired by a big-city police force. Christie Love proves her value to her fellow officers by going undercover to smash a drug ring. First telecast January 22, 1974, Get Christie Love! served as the pilot film for the weekly TV series of the same name. That series ran from September 11, 1974 until July 18, 1975.

Critic Reviews for Get Christie Love!

Audience Reviews for Get Christie Love!

I haven't seen a Pan Grier movie yet to compare to this. I didn't think it was too bad though. So, this made-for-TV movie led to one season of a TV series and as expected with TV censors it was much tamer than the low budget blaxploitation flicks coming out at the time. Still Teresa Graves was smart and beautiful in this picture as she works undercover to outsmart drug runners and suppliers.

This is a pretty decent (largely forgotten) blaxploitation flick. It's truly a product of the 70's-meaning that it appears dated, but that really only adds to its charm.