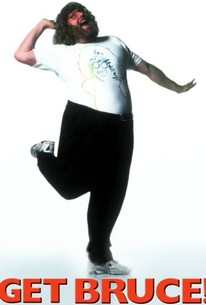 He has been entertaining us for years with his rare brand of wit and humor, but most of us may not even know his name: Bruce Vilanch. As comedy writer on almost every major award show and laugh doctor to some of Hollywood's biggest stars, Get Bruce celebrates the career of one of show business's hardest-working unsung heroes. In interviews from his celebrity client list, Billy Crystal, Whoopi Goldberg, Robin Williams, and Paul Reiser sing his praises and share anecdotes that amuse and delight. When sharing stories, they never manage to delve deeply for too long before the room explodes into wisecracks and jokes. Vilanch's first muse was actually Bette Midler, who discovered him during her humble beginnings at a nightclub in Chicago. It is he she credits for introducing her to Sophie Tucker, still a staple of her act today. Get Bruce is not skin deep, however; from a childhood with adoptive parents in New Jersey to landing a job as a reporter at the Chicago Tribune to his active life in Los Angeles, you bounce along with Vilanch. There is wonderful heart to this generous and committed man with his wild hair, clad in selections from his trademark T-shirt collection, In a medium that is all about collaboration, it is refreshing to see a film about a subject who is rarely in the spotlight. Outspoken, sometimes touching, but always hilarious, Get Bruce raises the curtain, exposing an incredible talent in a very lively film.

Bruce Vilanch
as Himself

Billy Crystal
as Himself

Bette Midler
as Herself

Robin Williams
as Himself

Nathan Lane
as Himself

Lily Tomlin
as Herself

Rosie O'Donnell
as Herself

Critic Reviews for Get Bruce

[It's] the kind of documentary we all want to have made about ourselves, in which it is revealed that we are funny, smart, beloved, the trusted confidant of famous people, the power behind the scenes at great events and the apple of our mother's eye.

Vilanch's ebullient manner is obviously a big reason why everyone wants, to borrow the film's title, to get Bruce.

The combination of Vilanch wit and celeb sightings should keep moviegoers satisfied.

I'm just not sure why it's released on film. It seems to me it would naturally play well for TV audiences.

There are no featured reviews for Get Bruce at this time.