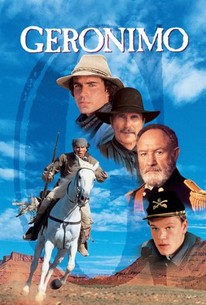 Critics Consensus: Geronimo: An American Legend fails to stir the soul, though its sweeping visuals and historical ambitions mark an intelligent change of pace for director Walter Hill.

Critic Consensus: Geronimo: An American Legend fails to stir the soul, though its sweeping visuals and historical ambitions mark an intelligent change of pace for director Walter Hill.

Walter Hill directs John Milius's script (co-written by Larry Gross) depicting a revisionist perspective on the "Geronimo Campaign" and how Geronimo, with 34 men, managed to elude 5000 U.S. cavalry men between 1885 and 1886 before his surrender at the Canyon of the Skeletons in September 1886. The film centers upon Charles Gatewood (Jason Patric), the U.S. Cavalry lieutenant who is charged with capturing the elusive Apache leader. Gatewood is torn by a grudging respect for Geronimo and his people and his duty to his country. But then all the white men in the film have a respect for Geronimo, even as they are trying to hunt him down and kill him. General Charles Crook (Gene Hackman), charged with overseeing the forced settlement of the Apaches on reservations, has nothing but admiration for Geronimo. ~ Paul Brenner, Rovi

Rodney A. Grant
as Mangas

Pato Hoffmann
as The Dreamer

Scott Crabbe
as Courier at Ball

Patricia Pretzinger
as Woman at Ball

A film of great beauty and considerable intelligence.

Gerónimo attempts to combine the classical and the correct-with mixed results.

It's Geronimo's rage against the inevitable which is the film's heartbeat and greatest strength.

A miscast Jason Patric tackles his role as a combination of a Brando impersonator and a guy who merely needs a nap.

Despite the film's visual and aural splendors, Geronimo fails to achieve its noble ambitions. Only a totally committed Western lover will be able to watch it without wanting, at times, to shout Geronimo and bail out.

Visually, action director Hill may be paying tribute to Ford's Westerns in the way he positions the chase and fight scenes against the panormaic vistas, but this Geronimo is curiously bland, neither absorbing nor stirring.

A gorgeously shot, fair-minded Western that honors Geronimo and the Apaches, but doesn't demonize the U.S. Cavalry. Vastly underrated and far superior to Dances With Wolves.

A bit crappy I'm afraid despite the all-star lineup. This one belongs in the lineup of ABC's After School Specials.

I can't quite put my finger on what it was about Walter Hill's, Geronimo: An American Legend, that kept this from being an exceptional film. With a cast made up of Wes Studi, Gene Hackman, Robert Duvall, Jason Patric and Matt Damon, beautiful shots of the American Southwest and a fairly accurate interpretation of historical events, it came across as being just an okay flick. Maybe I was a bit disconcerted by some of the utterly horrible headgear...LOL

Geronimo was historically accurate and that they used Apache historians to assist. Geronimo shows alot of war and apaches killing white and mexican.