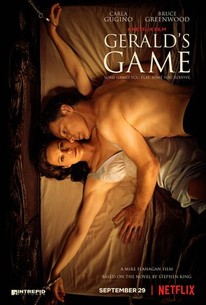 When her husband's sex game goes wrong, Jessie (Carla Gugino) -- handcuffed to a bed in a remote lake house -- faces warped visions, dark secrets and a dire choice. Based on the novel by Stephen King, Gerald's Game was directed by Mike Flanagan.

Unsurprisingly, the film is [Mike Flanagan's] most accomplished to date, the result of the years he's spent giving a damn about his characters and their anguish. He's so good at it, he even makes it look easy.

When it works, it's because of Gugino, the rare performer who can suggest victimized despair and empowered triumph.

The best King adaptation of the year so far.

It's a barnstorming showcase for Gugino, so often underused, who tackles a difficult, physically restricted role with gusto.

Finally, after the abysmal The Dark Tower and the overhyped It, we have a Stephen King adaptation that's worthy of the brand.

In bursts, between the memories and the ghostly Who's Afraid of Stephen King? playlets, Flanagan shows that he probably could have made a leaner, meaner, more suspenseful film.

Carla Gugino delivers one of the best performances of the year in a faithful adaptation from Mike Flanagan.

'Gerald's Game' is able to please King's fans and, at the same time, to propose a film that is perfectly maintained as a meticulous thriller and a horror artifact. [Full Review in Spanish]

What an awesome movie! Gerald's Game is a wonderful entry in the catalog of Stephen King adaptations. [Full review in Spanish].

Explores the dichotomy of truth and lies in a marriage, how men can transform into dangerous foes instead of husbands to the wives they supposedly love.

Gugino's performance is strong and varied enough to keep viewers riveted during a confronting personal ordeal ahead.

Filmmaker Mike Flanagan delivers an efficiently-paced adaptation that grows more and more absorbing as it progresses into its midsection...

One of those single location films in the vein of Buried or Frozen, and again it surprisingly works really well. It's a character study of this woman more than anything else, and a damned intriguing one at its best moments. At its worst, it can drag a little, and sometimes get a little silly. The ending in particular I really didn't like. Not the ending of her story, that works out fine, but the ending involving the reveal of one of her visions that feels so goofy and tagged on that it just leaves you with a real awkward taste at the end. Still, the stuff that works in the movie works. More creep and uncomfortable than horrifying, but it does mess with your head in an effective way.

Quite honestly, it's very rare that a film unsettles me, so this is big of me to say, but I actually had to turn my head throughout my viewing of this film. Now streaming on Netflix, Gerald's Game is the latest Stephen King novel to receive a feature film adaptation, and while I probably won't find myself ever revisiting this movie, it's worth a watch if you can stomach it. Movies like the Saw sequels that have mindless and senseless gore will audience members in laugher, but when a film really brings you into its atmosphere and makes you care about what's happening, the gore can feel very realistic, which is why I caution my recommendation of this movie as a whole. Here is why Gerald's Game is impressively hard to watch. Although it may seem impossible to spoil a movie like this, the over-arching story is actually a spoiler itself. To put it simply, Gerald's Game is about a wife and her husband as they travel to a lake house in order to juice up their marriage. After handcuffing his wife to the bed in hopes of pleasuring her, a series of events lead to her being trapped on the bed, alone. Exploring her tragic backstory, while simultaneously showing her struggles throughout her current situation, there's absolutely nothing pleasant about this viewing experience. This is actually quite an impressive piece of storytelling. While this dark and twisted story will leave many probably not wishing to finish the movie, there's no denying that director Mike Flanagan has crafted another tense film. Helming solid horror flicks like Hush and Ouija: Origin of Evil, I knew that this film was in good hands, even though I truthfully didn't know much about it when going in. Flanagan does a wonderful job in sucking you into this premise, and I believe this easily could've been a very boring idea, even though my experience of this overall film did drag a bit. Although that should be a minor complaint, this aspect is precisely what will keep me from watching it a second time. I'm all for a movie taking its time to tell a worthwhile story, but I found myself bored quite often throughout the majority of the film. By the time the third act had hit, I was still very intrigued with what was going to happen next, but I wasn't as invested. Yes, the conclusion is satisfying, but even for a mere 100 minute runtime, I think it could've been shaved to about 80. From it's near silent score, to great direction, everything about this movie is atmospheric and well-done, but I wasn't sucked into this premise like I wanted to be. In the end, this is a hard movie to recommend, because even though the premise itself is interesting, it's very slow and it has some pretty brutal imagery that I even have issues with, and that never happens to me. Gerald's Game is a nice little thriller that's meant to unnerve its audience, and while it does just that, it's also a tedious experience in my opinion. There isn't much I can say without ruining the movie, but I'll warn you by stating that my description of it is unsettling at times won't even begin to cover it for some people. Overall, this is a well-made film with a solid ending, but I just wasn't invested enough to ever feel the need to watch it again. It's worthy of the praise that it's receiving, but it just wasn't for me.

Mike Flanagan directs two worthy star efforts here, and both from highly expected places though often little utilized. Carla Gugino and Bruce Greenwood are two actors who've often kept plugging away but are usually behind the main action, and so are unfairly unnoticed for it. In this effort though, another Stephen King novel, both are allowed some room to run and both do, like Olympians set free, giving substance and thrills to this macabre little tale of survival. This here is a real meal, unlike the bigger production Dark Tower from this year as well.

'Gerald's Game' is a ravenously sinister reaping of interiorized horror and Mike Flanagan trickles it with cautionary black humor (such as when the Viagra side effect is cardiac arrest and Jessie Burlingame (Carla Gugino) is still manacled akimbo to the bed posts and the front door is ajar). In the resurgence of Stephen King on other mediums, a few of his more obscure novellas are being transmogrified and among is the psychosexual eroticism of 'Gerald's Game' in which Sam Cooke's dulcet ballad reverberates over an overhead credit sequence of Bruce Greenwood interlards a pair of handcuffs into his suitcase for a getaway weekend with his voluptuous wife. If ever there was an ineluctable creature who be a carnal treat for all genders, it would be Gugino who permeates iliac sensuality from her every fiber. When lawyer Gerald (Greenwood) is caressing her thigh on the ride, she is vaguely tentative which is shorthand for the alienation between the duo. From the moment Jessie gourmandizes a stray canine (with a 'Cujo' reference inbound), the seeds of Chekhov's gun are germinated for a rabid appearance from him later on and once he repasts on Gerald's forearm, it is a short-fuse tinderbox until Jessie is his next entree. Flanagan isn't only a gorehound director (although a wrist slitting with glass shards is unconscionably gag-reflex-inducing) and he actually rhapsodizes the viewers with the dehydrated, tour-de-force hallucinations of Jessie in which a figment Gerald animadverts her dearth of maternal instincts and philosophize on the profound subject of "who exactly did I marry?". In the flashback segments to Jessie's prey childhood, Henry Thomas is indelibly creepy as Jessie's lecherous father who gerrymanders her paterfamilias fetish when they're watching a solar eclipse. On the downside, the subplot about the "Man Made of Moonlight" nudges towards a Kafkaesque reverie that the film never properly earns.