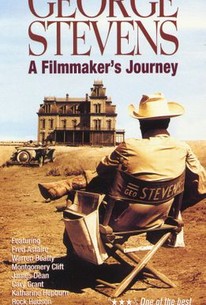 The man who assembled the remarkable documentary George Stevens: A Filmaker's Journey had the benefit of knowing the subject intimately: the film was written, produced and directed by George Stevens Jr. Utilizing pristine-quality filmclips and interviews, Stevens Jr. details Stevens Sr.'s rise from silent-film cameraman to one of the top producer/directors in Hollywood. We are treated to snippets of Stevens' camerawork on the Laurel and Hardy films at Hal Roach Studios, then we are transported to his salad days as a feature director at RKO. Among the films highlighted from this first chapter of Stevens' directorial life are Alice Adams (1935), Swing Time (1936) and Gunga Din (1939) (one would like to have heard a bit more background info concerning Stevens' Wheeler and Woolsey comedies). Next we find Stevens as an autonomous entity at Columbia Pictures, producing and directing such classics as The More the Merrier (1943). The war years are thoroughly covered via Stevens' vivid color footage of the invasion of Europe. The last stages of Stevens' Hollywood career is traced through generous portions of A Place in the Sun (1951), Shane (1953), Giant (1956) and The Diary of Anne Frank (1959). The many interviewees include Katharine Hepburn, Cary Grant, Fred Astaire, Ginger Rogers and Warren Beatty. As an added filip, A Filmmaker's Journey includes rare home-movie sequences showing George Stevens at home and at work--all filmed with as much care and professionalism as Stevens' "mainstream" pictures.

George Stevens Jr.
as Himself, Narrator

George Stevens
as Himself

Fred Astaire
as Himself

Cary Grant
as Himself

Douglas Fairbanks Jr.
as Himself

Katharine Hepburn
as Herself

Rock Hudson
as Himself

Sam Jaffe
as Himself

Jean Arthur
as Herself

Fred MacMurray
as Himself

Jack Palance
as Himself

Joel McCrea
as Himself

Ginger Rogers
as Herself

Elizabeth Taylor
as Herself

Max von Sydow
as Himself

Shelley Winters
as Herself

Warren Beatty
as Himself

Frank Capra
as Himself

John Huston
as Himself

Rouben Mamoulian
as Himself

Joseph L. Mankiewicz
as Himself

Alan J. Pakula
as Himself

Fred Zinnemann
as Himself

Pandro S. Berman
as Himself

Hermes Pan
as Himself

Ivan Moffat
as Himself

Hal Roach
as Himself

Jack Sher
as Himself

Millie Perkins
as Herself

Irwin Shaw
as Himself

Two things distinguish the film: The quiet professionalism with which the materials have been edited together, and the feeling that George Stevens Jr., really is engaging in a rediscovery of his father through the making of this film.

There are no featured reviews for George Stevens: A Filmmaker's Journey at this time.