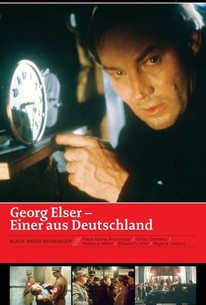 Actor Klaus Maria Brandauer makes his directorial debut with The Seven Minutes (released in Germany as Georg Elser-Einer aus Deutschland. Brandauer also stars, playing a solid citizen of 1939 Berlin. Though loyal to the Fatherland, he despises Hitler and the Nazis. A few weeks after the start of World War II, Elser (Brandauer) begins cooking up a scheme to assassinate Der Fuehrer at a reunion for the participants of the 1923 Beer Hall Putsch. All he needs is seven minutes. All he doesn't need is the unwitting intrusiveness of innocent barmaid Anneliese (Rebecca Miller, daughter of playwright Arthur Miller). Even though we know the outcome, Brandauer sustains an incredible amount of tension. The film isn't quite in the league of Day of the Jackal, but it's not too far from it. The Seven Minutes was adapted by Stephen Sheppard from his own novel The Artisan.

Ralf Richter
as SA-Leader
View All

There are no critic reviews yet for Georg Elser - Einer aus Deutschland. Keep checking Rotten Tomatoes for updates!

There are no featured reviews for Georg Elser - Einer aus Deutschland at this time.